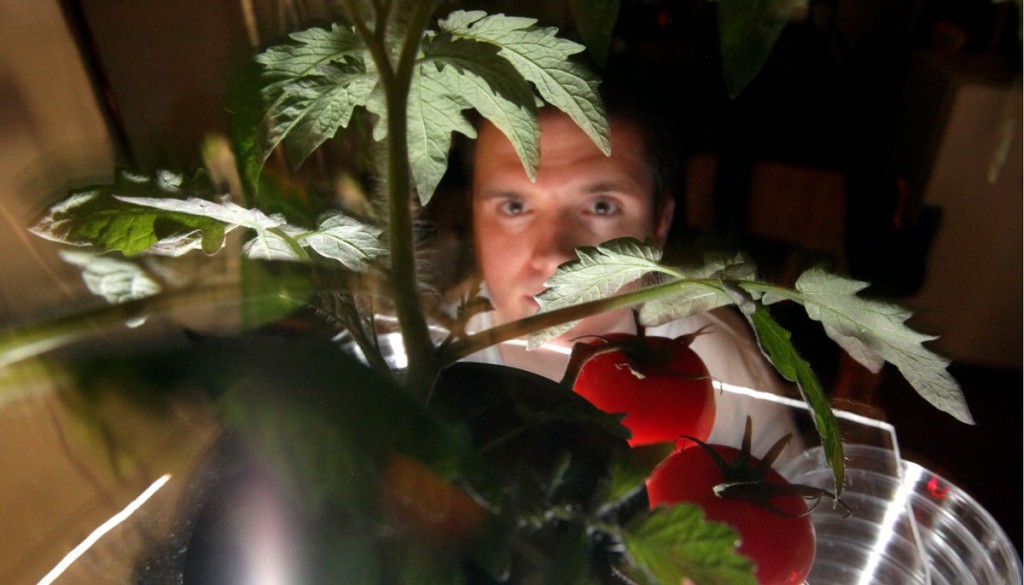 A research study into the whitefly resistance of wild tomatoes compared against commercial plants suggests some of the 'wildness' should be bred back into crops to safeguard future production and negate the need for pesticides. Thomas McDaniel, the PhD student who led the research at Newcastle University's School of Biology, talks with www.freshfruitportal.com.

The sector's quest for larger sized, long-lasting and redder tomatoes may have inadvertently bred out key characteristics that help the plant defend itself against a major predator, the whitefly.

This voracious pest, Trialeurodes vaporariorum, is the foremost pest for British tomato growers. It damages the plant in three ways; by extracting sap and vital nutrients, by creating a sticky dew on the plant's surface that attracts mould and by transmitting damaging viruses through saliva.

Expensive biocontrol methods are used to reduce impacts, but because of the costs involved some farmers also use chemical pesticides as a second line of defense, including those linked to dwindling bee populations.

The findings could have major implications for the tomato industry.

Initially we assessed whether the wild tomato was more resistant or not and we looked at whitefly and free choice between the commercial variety and the wild tomato," McDaniels tells www.freshfruitportal.com.

"We found the whitefly much preferred the commercial varieties because they were easier for them to land on and feed.

"We backed that up with some egg lay studies where we counted the number of eggs that were laid on both the wild and commercial tomato and found much fewer eggs laid on the wild tomato and that confirmed our idea that the wild tomato is more resistant."

McDaniel then carried out movement studies looking at how easily the whitefly could move across leaf surfaces in both wild and commercial tomatoes.

"It has been shown in other work that leaf structures can be important in limiting whitefly movement and survival on tomato plants.

"But that was not the case with our particular tomatoes so we knew then that it wasn't a physical thing, its something else. We then used a powerful technique called electrical penetration graphs and this is used to very closely analyze how well insects like whitefly feed on its host."

The EPG technique works by creating a partial circuit between the tomato plant and the whitefly as the insect feeds. By fitting gold wires to the back on individual whitefly and measuring the signals as they fed on plant sap, the research showed the insects spent more time roaming and less on feeding.

"It inserts its mouthparts into the plant and creates the circuit which gives you a waveform output that you can analyze for different feeding behaviors.

"We looked at a wide range of feeding behaviors and found several pointing towards a resistance mechanism that was based just inside the plant but not inside plant cells."

Another resistance mechanism was also discovered which causes part of the plant to thicken and become viscous which stops the whitefly from feeding.

The results showed the whitefly were 80% more likely to settle and feed on the commercial tomato plants, in this case Solanum lycopersicum or Elegance over the wild variety Lycopersicon pimpinellifolium.

Implications of the research

Tomato growers are ordinarily interested in high yielding and fast-fruiting plants but McDaniel's research presents a case for breeding the wild, whitefly resistant genes back into tomatoes either through selective breeding programs or genetic engineering.

"It would offer a real solution for the commercial tomato industry.

"Maybe now we are finding there are some shortcomings and maybe there are other attractive traits that we could introduce that would be beneficial in today's crops.

"We would certainly hope our research will have an impact. It's not just a pie in the sky idea; we would be interested in introducing this to make it into something useful that could be applied and would help secure tomato production in the future."

The study was funded by the U.K. government supported Biotechnology and Biological Sciences Research Council (BBSRC).