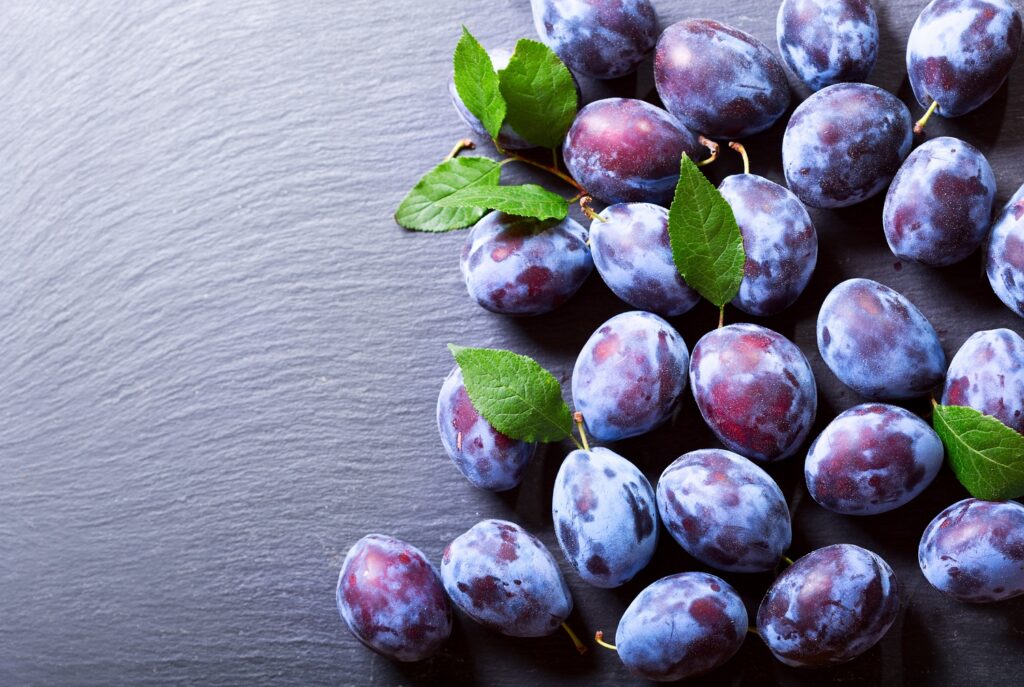 In this installment of the ‘Agronometrics In Charts’ series, Sarah Ilyas studies the impact of the USDA’s authorization of the import of Chilean plums under a Systems Approach. Each week the series looks at a different horticultural commodity, focusing on a specific origin or topic visualizing the market factors that are driving change.

The USDA recently sanctioned the entry of Chilean plums under a Systems Approach. Based on the findings of a commodity import evaluation document submitted by APHIS, plums from Chile were declared to be safe for importation under a systems approach, for a cutback in the risk posed by European Grapevine Moth (EGVM).

The decision to allow a systems approach for Chilean plums is a win for everyone, says Ronald Bown, President of the Chilean Fruit Exporters Association (ASOEX). “Chile represents 99% of plum imports into the United States, so the re-entry of plums significantly impacts exporters, ports, importers, retailers and, most importantly, American consumers, they will be able to enjoy fresh, quality plums in the months leading up to domestic production from the U.S.”

As a result of this approach, plums are expected to be harvested in a much more viable manner, and quality standards upon their arrival are expected to exceed preceding levels.

Plums produced in production sites that do not meet the requisite quality standards will require an APHIS approved quarantine treatment such as fumigation or irradiation; only plums commercially produced under an operational scheme will be given a go-ahead for importation.

The techniques whereby risk mitigation will be carried out in the systems approach for plums from Chile include registration of production sites and packing houses, trapping for EGVM adults, conduction of surveys for EGVM immature stages, approval of exports without treatment only from pest free places of production in areas of low pest prevalence, inspection of packing houses and granting phytosanitary certifications.

Plums that have been entering the US so far have met consistently strong demand. Mark ups in the quality of the incoming volumes due to the sanction will likely generate a higher demand. 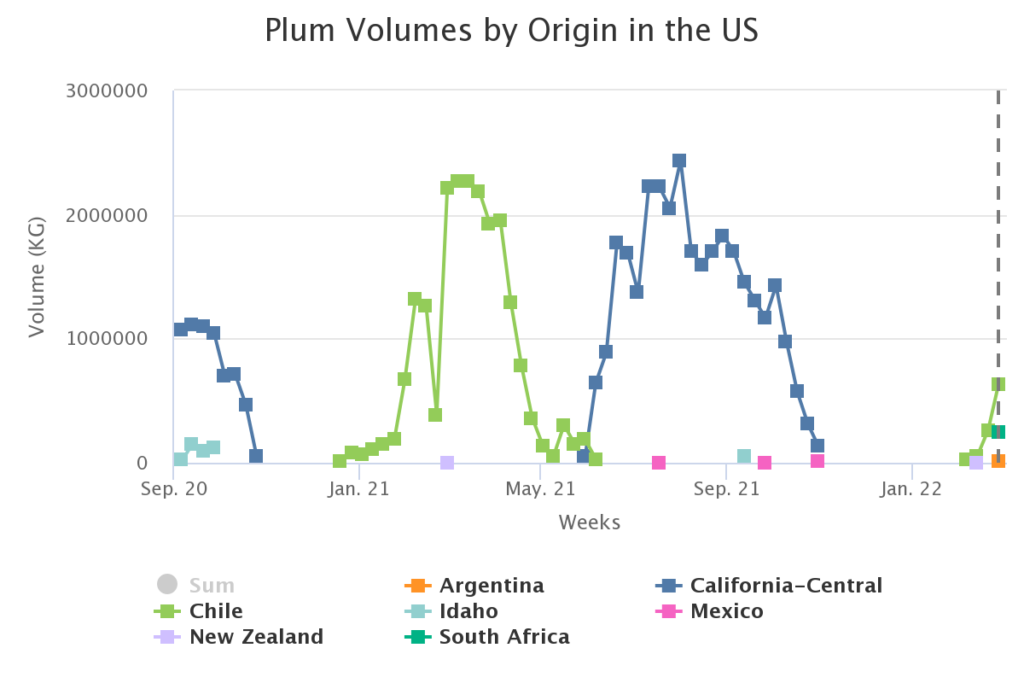 Week 8 saw 640 K kgs coming in, higher volumes will be flowing in soon, as the season reels out, cumulative volumes this year may be lower compared to the previous season  because a narrower window for imports has been left until the end of the season. 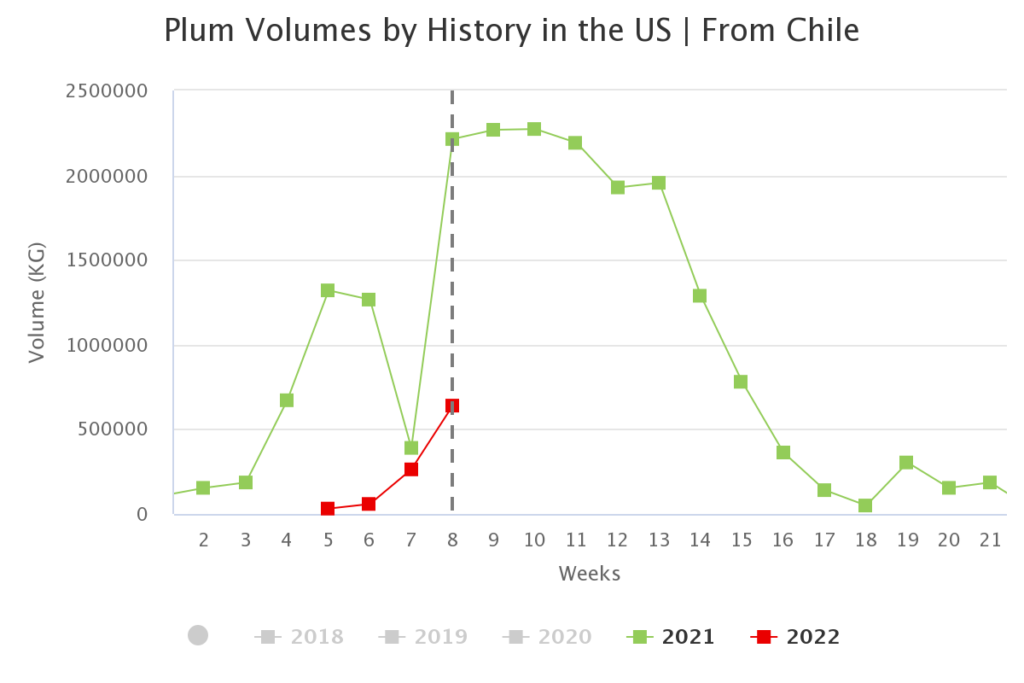 Logistics has been a major deterrent for imports so far, due to port delays and the scarcity of container vessels. Air freight prices have spiked in the past year and the fact that the Chilean grape market has been thriving lately implies that grapes took precedence over plums.

As for plum pricing, it’s been strong. “It’s definitely a good market. In a typical year, $20-$22 is a pretty average price,” Bernal says. The season, so far, has witnessed higher prices on average in comparison to previous seasons. As can be noted below, the peak price recorded in the current season was $22.56 per package. 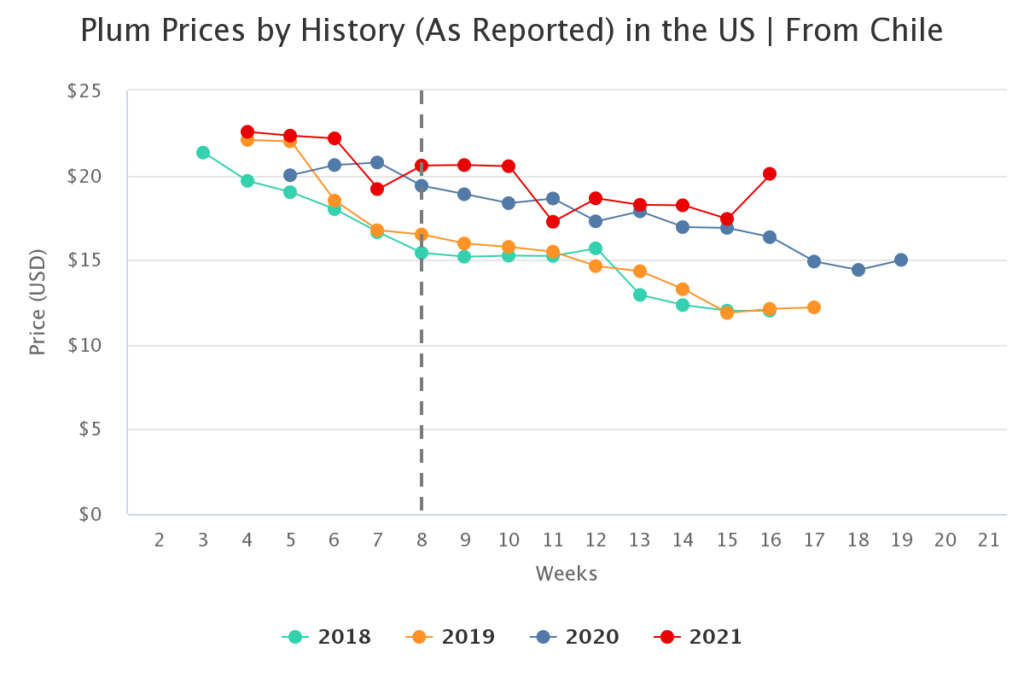 Most exporters had anticipated a smaller export window for Chilean plums this season and therefore began seeking out alternate markets such as Latin America, Europe and Asia. Lower incoming volumes due to a constricted time frame may imply that prices for Chilean plums will surge in the coming weeks.