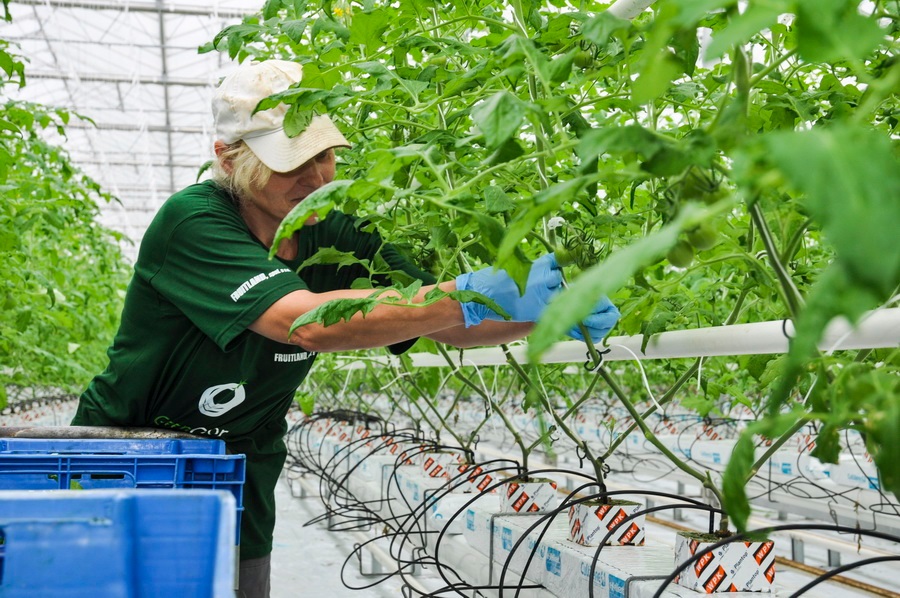 The group only uses renewable energy from geothermal sources, and its brand 'Happy Tomato from Rye Island' is taking market share from big European players in Slovakia, the Czech Republic and Hungary.

Inspired by the Dutch model of protected agriculture but under different conditions, since 2008 a cooperative of growers from southern Slovakia claims it has been able to take more than half of the market and has also expanded into new growing regions.

"They are under lighting so we can have products on the market all year," he told Fresh Fruit Portal during Fruit Logistica in Berlin recently.

"We are here because we would like to extend the export to other countries, but our main focus is to grow and sell locally in our region of the Slovakia, the Czech Republic and Hungary.

"We are trying to make this cooperative international, having some growing facilities in Hungary, the Czech Republic and Slovakia and doing the logistics together."

He said the average greenhouse was between 4.5-6 hectares, and all members had to have a very strong environmentally-friendly philosophy in practice.

"If you have all of that you have to do GlobalG.A.P. certification and that’s it.

He said the team traveled far and wide to select the best seeds, and at the moment GreenCoop was producing around 20 different tomato varieties.

"After doing the tasting, going to demo greenhouses and seeing they look nice, in a small area we trial them to see for one year how they react to our environment in southern Slovakia.

"In south Slovakia you have a granted 2000 hours of sunlight but some varieties need more, some need less, and usually in summertime we have very high temperatures in greenhouses.

"Therefore some good varieties that are suitable for the Netherlands, we cannot use in Slovakia."

He said the greater amount of sunlight meant his growers had an advantage over the Dutch growers.

"We have some disadvantages because in our area the summers are hotter, but the main advantage is the geothermal energy.

"In our region, if you drill into the land deeper than 1km (0.6mi), you will find hot water and you can heat the greenhouse."

Director of production Zoltán Kiss said the name 'Happy Tomato from Rye Island' came from a literal translation of where the growers are from, called 'Zlatná na Ostrove´in Slovakian and 'Csallóköz' in Hungarian.

"The island between two streams of the Danube and this is the biggest freshwater island in Europe...it's a Hungarian part of Slovakia with very good soil and a lot of sunshine.

"That means we don’t need to buy Spanish or Italian or Dutch tomatoes for our customers. If we didn't have that much sunshine, we'd have to buy tomatoes on trucks, picked green and ripened in the trucks, and that's not good, it loses its taste.

"So our tomatoes are getting to market fresh and on time because we are not buying them from abroad...that's why thanks to God we have very good demand for our product, and we have 50-60% of the market in Slovakia and we are selling into Hungary and the Czech Republic now also."

He said when the cooperative began with this project in 2008 it was not common to do "green things", but now others are trying their hand at the practice as well.

"I can say in our region we are the main producers and the biggest producers of tomato," Kiss said.

While GreenCoop has been inspired by the Dutch greenhouse industry, that does not just mean at a production level.

"We can say that in the Netherlands they are doing it in a very professional level – they have been doing this business for a long time and have the art of selling."

Below you can find a video of the cooperative's operations as well as some photos: