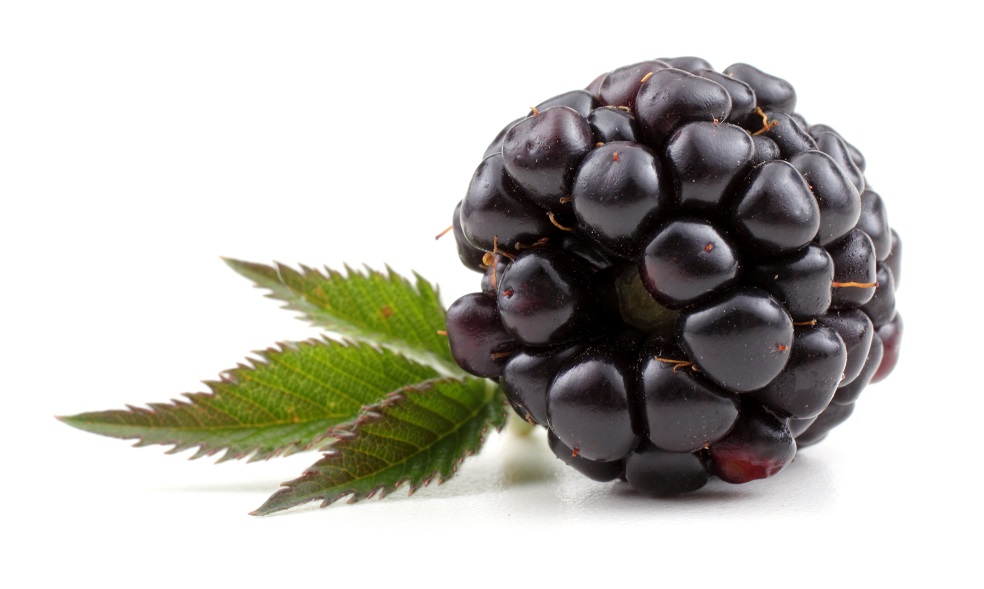 In this 'in charts' mini-series of articles, Colin Fain of data visualization tool Agronometrics illustrates how the U.S. market is evolving. In each series, he will look at a different fruit commodity, focusing on a different origin or topic in each installment to see what factors are driving change.

Guatemala’s climate is one of the few in the world that allows for year-round production of blackberries. Most of their volume, however, is strategically produced to fill the gaps left by Mexico, and since 2010 one in four blackberries consumed by Americans between July and September has been from this Central American origin.

US Blackberry Movements by Origin 2016 in Lbs 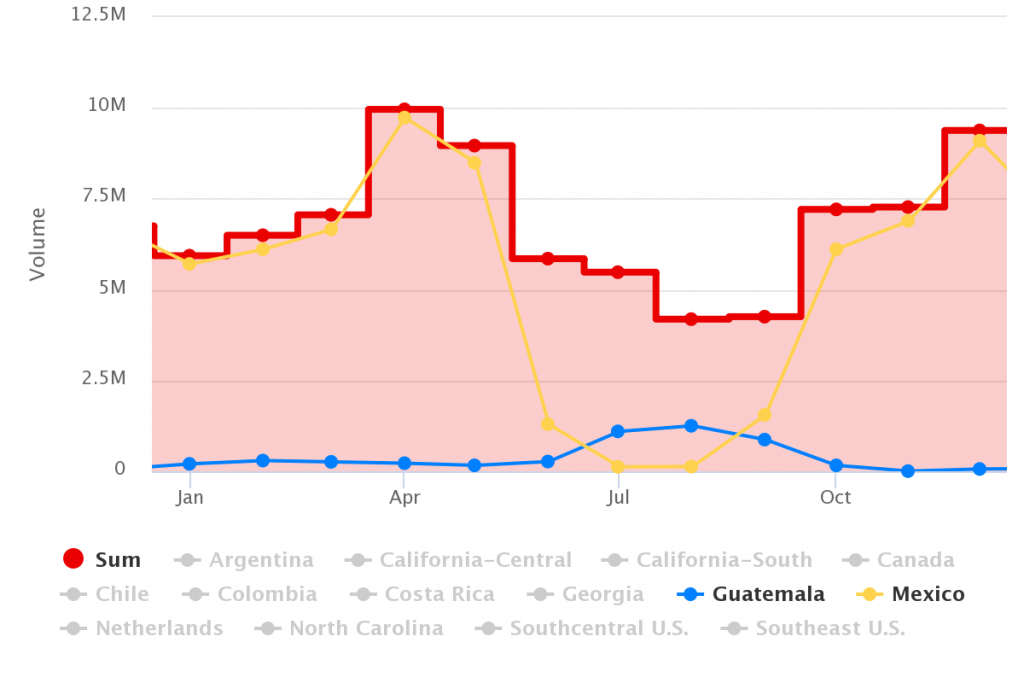 Guatemala's strategic position has allowed the origin to receive a premium against the prices of their northern neighbor - coming in at 5% higher historically and a significant 27% this year. This feat is impressive considering growing competition from U.S. origins and that fruit from Guatemala has further to travel than the Mexican competition. 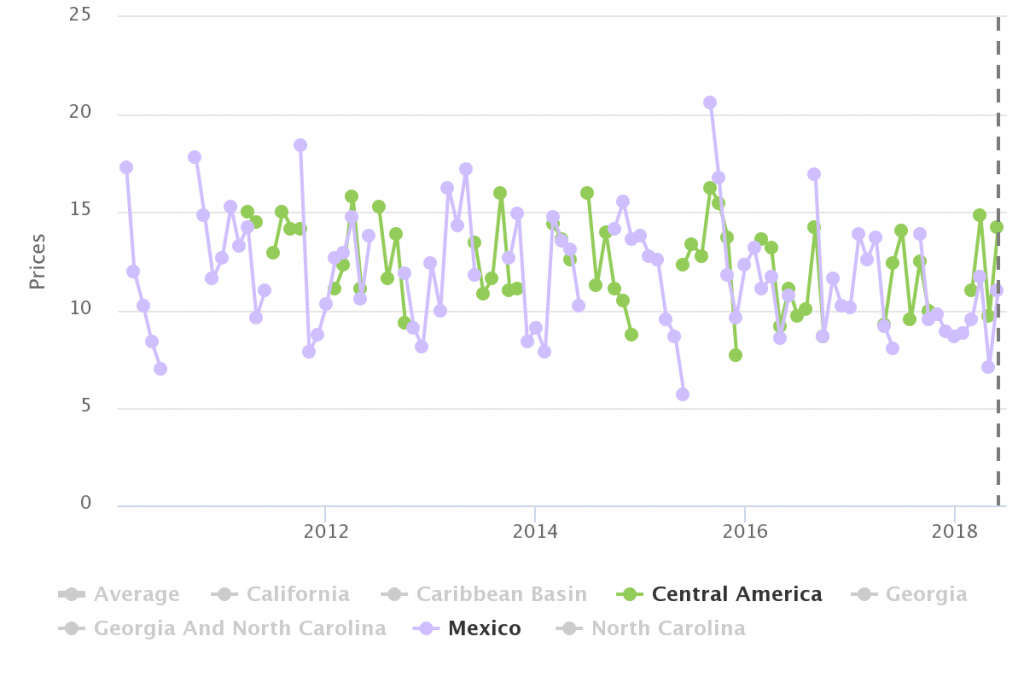 As Guatemala’s blackberry season is about to get underway, I was very curious to know what will be the effect of the devastating eruption of the aptly named Volcano of Fire, which took 113 lives and has left, as of yet, 332 missing.

I was particularly concerned, knowing that much of the blackberry production is centered around Antigua, a beautiful colonial city and the capital of the region where the volcano is located. The volcano itself lying only 20km to the southwest of the city.

US Blackberry Movements from Guatemala by Month in Lbs, Comparing the Last Four Years 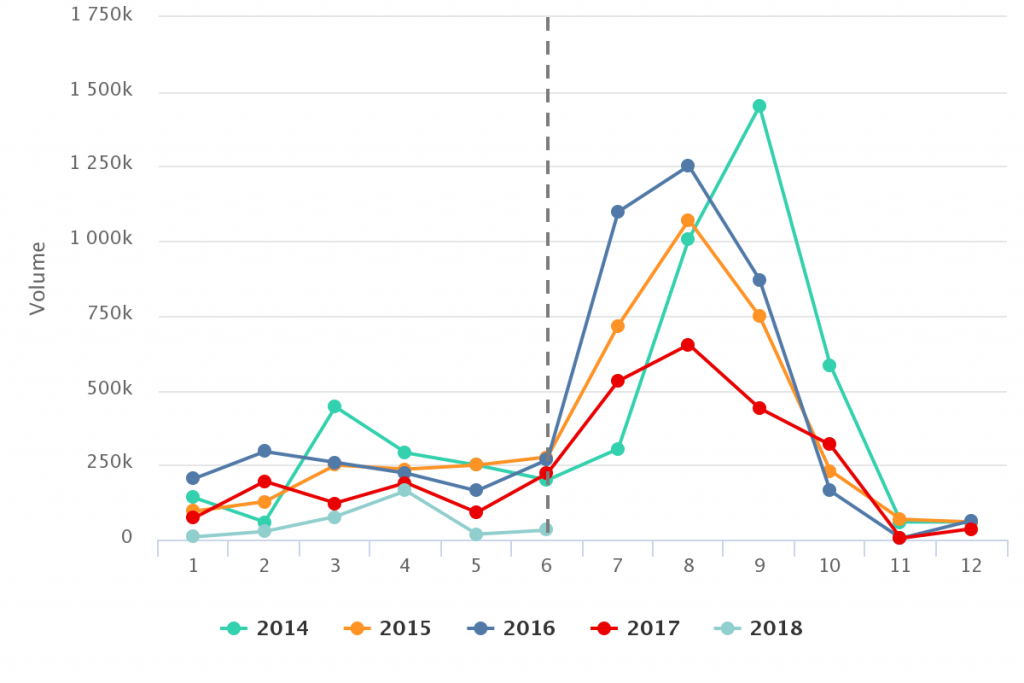 To dive deeper into what we could expect from the region, I reached out to one of our clients, Planesa, who commercializes their produce in the U.S. under the label of PureFresh and is one of the country's most successful blackberry exporters.

Estuardo Robles, Pure Fresh’s director of business development, was able to shed some light on the situation on the ground. In the chart above we can see that June this year has reported one of the lowest volumes compared to previous years in the country's history. Part of the problem was caused by transport bring interrupted. Even the airport airport shut down - a major issue since all blackberries from Guatemala and sent via airfreight, with Miami as their primary destination.

With a large percentage of the company's production covered by tunnels, Planesa’s productions teams are very grateful that most of their fruit was not affected by the fallout from the volcano, however, manpower had to be pulled to help clear the tunnels of ash that was blocking out the sun, which also had an effect on the volume exported in June.

In a great victory for tunnel technology for blackberries, Planesa is expecting to overcome the largest volcano eruption Guatemala has experienced in the last 500 years. According to their current expectations, Guatemala’s exports should get back up normal levels in July, with Planesa’s own volume even surpassing what they sent last year.

In our mini-series, we work to tell some of the stories that are moving the industry. Feel free to take a look a some of the other articles listed below.

June saw some of the lowest exports in years from the country, but Planesa expects them to return to normal in July.