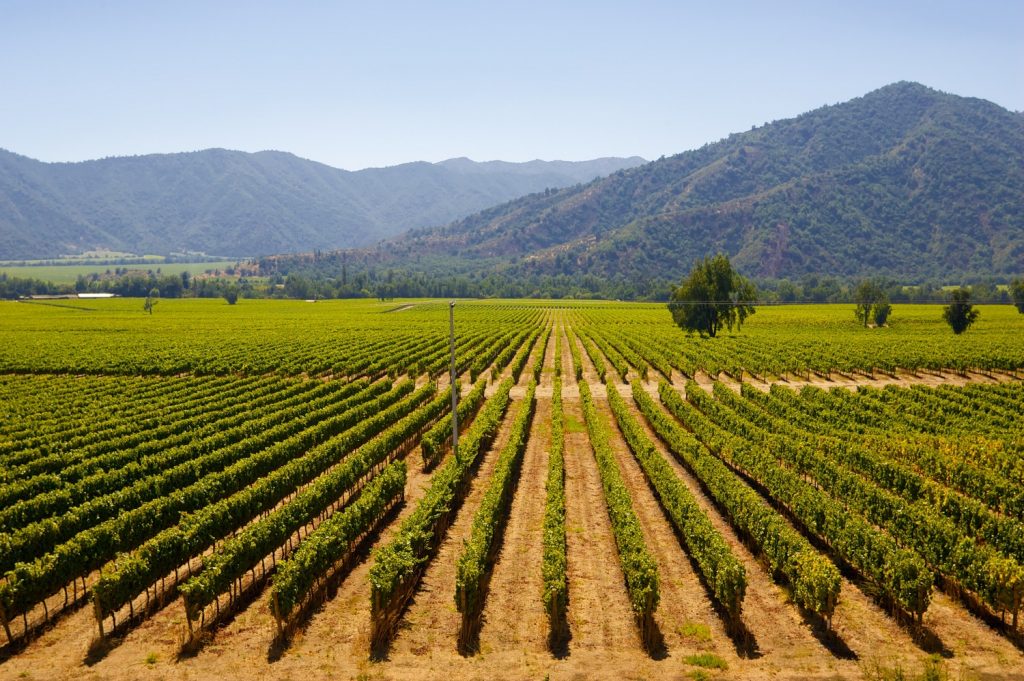 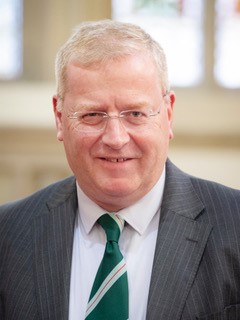 Chile and Peru have emerged as two of the real powerhouses of the Latin America fruit and vegetable sector and seen exports develop significantly to a wide range of international markets around the world.

Since the mid-1990s, Chilean exports have boomed in terms of value from around US$1.3 to over US$5.5 billion per annum and Peru has seen its exports grow significantly, in the same period, from under US$200 million to over US$2.4 billion on an annual basis. In more recent years though the growth of Chilean exports has started to slow while those from Peru have continued to increase impressively.

The two industries share a number of features in common, but the background to the development of their export sectors has been very different. The development of exports from Chile began as far back as the 1940s but really kicked into life with the adoption of the free market economic theories, as put forward by the so-called “Chicago Boys”. This was a group of US-trained economists from the University of Chicago. They then went on to hold a variety of senior government positions in the Ministries of Finance and Economy and in the Central Bank.

As a result, in the 1970s and 80s, this saw significant investment into the Chilean economy and not least in the fruit sector. Investment from the US and to some extent, the Middle East poured into the industry, along with indigenous finance. This helped to produce what is often referred to the “Chilean Miracle”.

At the time, the influence of US-trained economists in Latin America was, however, not confined to Chile. Over a period of time, there was plenty of similar activity to be found in other countries, such as Peru. The reality is, however, that Chile probably had a 30-year head start in terms of developing a modern, forward-thinking fruit export sector compared to other countries in Latin America.

Looking back, Chile had the benefit of the so-called prime mover advantage position. While putting them in a strong position to spearhead the development of Latin American off-season exports, it also meant that other countries can look and see what has been achieved, how it has been done and learn from any mistakes that have been made. To be fair to Chile, these have been few and far between.

What Chile has done is look to keep the distance between themselves and other Latino countries, not just by the development in some cases of new markets, but also by a deep involvement in influential trade associations, such as FRESHFEL, SCHAFFE, the PMA, EUREPGAP etc.

The product and export mix of the two countries is somewhat different too, with Chile building its success mainly on top fruit, grapes, kiwifruit, avocado and some stonefruit. Peru, in contrast, has largely built its reputation on products such as avocado, mango, grapes, citrus, and of course, originally asparagus. 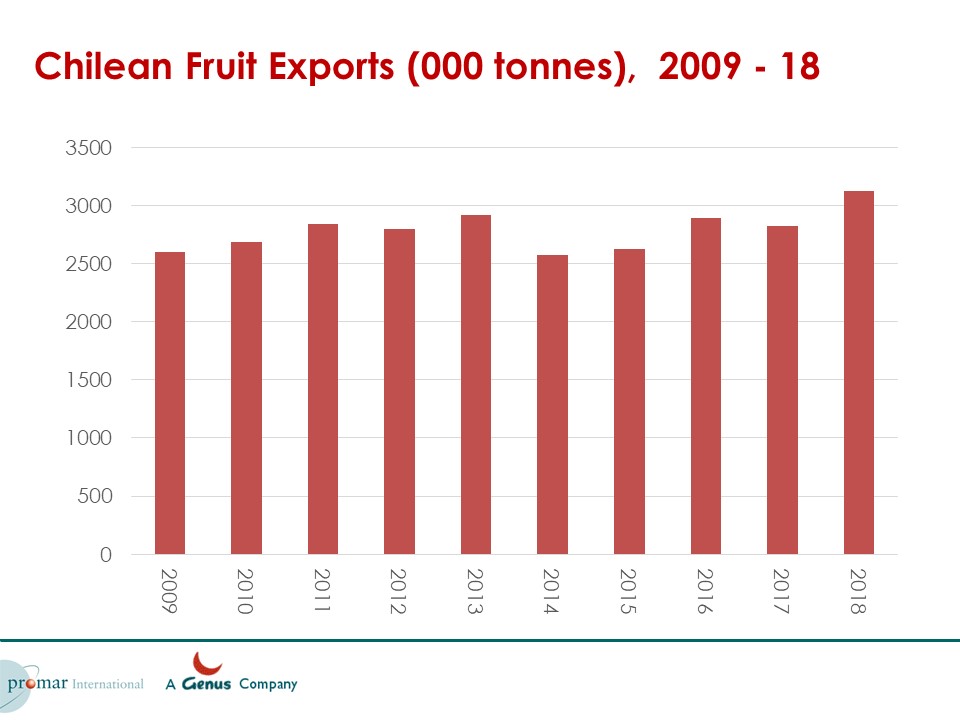 At one stage, the Peruvians were the official world champions of processed asparagus. The entry, however, of the Chinese into this sector over the last 10 years or so, has seen the Peruvians forced to look for higher-value products and markets. Opportunities and interest in products such as blueberries is one area
that both Chile and Peru have in common.

The two countries do, however, have a number of things in common. These include the following:

In both cases, there also appears to be a remarkably overriding and positive attitude towards the development of their own industries and that of the international fruit market per se. Having worked with both, this can be summarised as being “don’t tell us why we cannot do it, tell us what we need to do to make it happen”.

In terms of the UK market, this is still an important destination for both countries. Part of the attraction of the UK has been the relatively large and affluent population of some 65 million consumers and while demanding both technically and commercially, clear and well-understood routes to market Peru clearly sees the UK as an attractive market for now - and in the future.

Looking at the basic statistics, it is clear to see why. UK imports of strawberries have increased from 46,000 tonnes to over 53,000 tonnes over the last few years and which are dominated by supplies from the likes of Spain, Belgium and the Netherlands – all of whom could suffer if we end up with a No Deal Brexit – and then exports from North Africa.
Supplies from the Americas are limited at the moment to the US and Mexico.

Imports of raspberries into the UK have also increased from 15,000 tonnes per annum to over 27,000 tonnes since 2013. Spain and the Netherlands, as well as Portugal,  are all strong in this category. From outside the EU, Mexico, South Africa and North Africa are all important suppliers.

Imports of blueberries have rocketed from 29,000 to 48,000 tonnes since 2013. Peru has a strong share of this market and supplies 7,000 tonnes per annum along with the US, Chile, Argentina and South Africa – and with a plethora of other EU producers.

The Peruvian mindset is positive. Having secured market access to the UK, the industry seems set for future export growth. They will build on the success of the last 10 years or so and cement its reputation as a highly professional and innovative supplier. 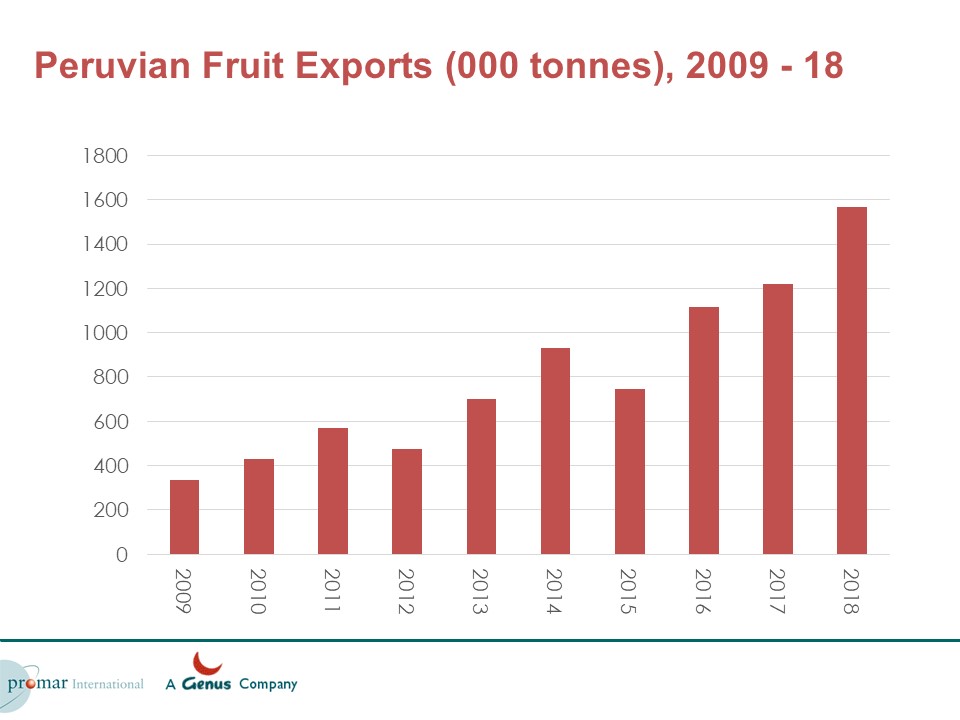 This has all been carried out under the auspices of the “Super Food” label that Peru looks to promote and the evocative imagery of the country. All products go through some sort of life cycle. Peru has done its homework and analysed where its products are on this in the UK.

In Santiago, they seem as determined as ever to keep their industry moving forward with the development of new markets and new forms of promotional support being among the key objectives. A few years ago, Chile began to promote its fruit as being “world-class”. They continue to do so. Having set this as the ambition of the industry, it is hard to go back.

So, for Chile, the reality is that it has no option than other to keep moving forward. China, others in SE Asia and then developing business in newer markets such as Sub Saharan and North Africa combined with existing trade to the EU and US, all seem set for further growth, as does the further diversification of the export product mix. At the same time, Peru is very
much hot on their heels, often spurred by the huge opportunities they both see in SE Asia, and not least, China.

John Giles is a Divisional Director with Promar International, the value chain consulting arm of Genus plc and has worked on fresh produce assignments in over 60 countries. He can be contacted at john.giles@genusplc.com