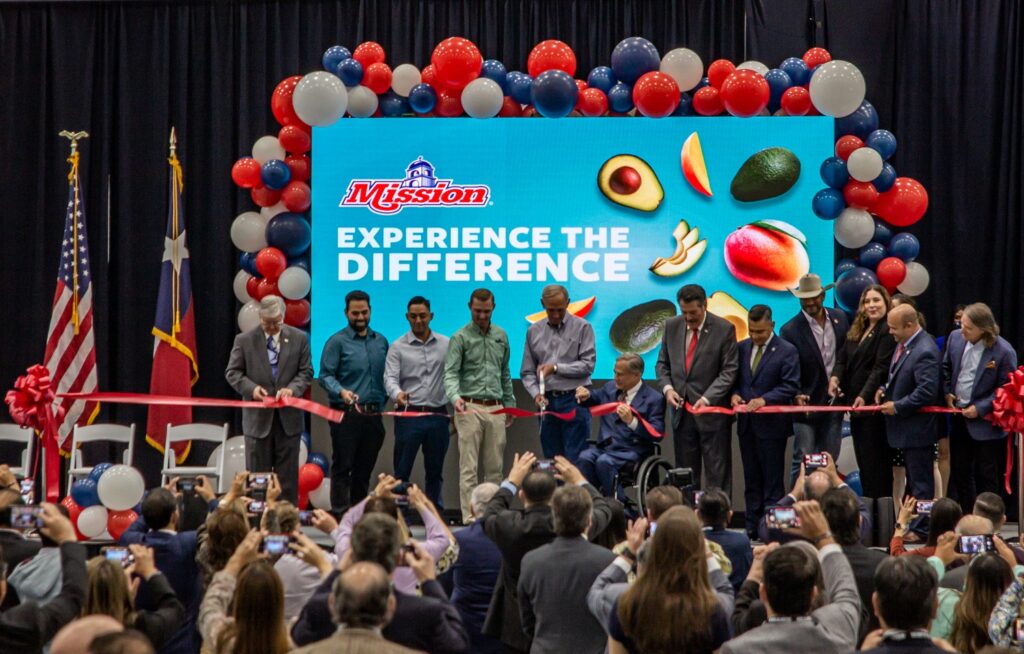 The avocado company, which has additional offerings in mangos, says the opening comes in celebration of its first anniversary of its initial public offering on Oct. 1.

On Sept. 29, in coordination with the offices of Texas Governor Greg Abbott and City of Laredo Mayor Pete Saenz, Mission Produce held a ribbon cutting ceremony to celebrate the facility’s grand opening.

Serving as a major hub for avocados coming from Mexico into the United States, the 262,000-square-foot facility is positioned to funnel product into the rest of the distribution centers in Mission’s network.

The facility is designed with state-of-the-art refrigeration, ripening rooms and pallet cooling capabilities, and has the capability to provide logistics support and transportation services, in addition to cold storage, bagging operations and packing for external enterprises, which will generate additional revenue and value for the Company.

Mission’s Laredo mega center will strengthen the Company’s advantage in the avocado sector and is expected to increase its third-party storage and distribution capabilities for others in the produce industry, increase access throughout North America and expedite transportation times.

“Our new facility in Laredo opens up many doors for us at Mission,” said Mission’s chief executive officer and founder, Steve Barnard. “The strategic location serves as the perfect connection between our operations in Mexico and our customers in the United States.

"We are excited about our work in Laredo and are proud to contribute to the local community, continue to lead in the avocado industry, and serve the produce industry through our enhanced infrastructure and capabilities.”

"I am proud to welcome Mission Produce's new distribution center to Laredo, spurring economic growth and creating even more good-paying jobs for generations of Texans to come," said Governor Abbott. "The entire community of Laredo and investments from great companies like Mission Produce play pivotal roles in Texas' economic success story, and together we will keep the Lone Star State the best place to live, work, and raise a family."

Mission has already filled 70 new positions to staff the facility and is expected to reach 110 once at full capacity. The company’s move has contributed to rapid economic growth in Laredo as the area sees an influx of business investments, specifically from the produce and cold storage industry.

Since Mission’s announcement of the distribution center, more than 450 produce or cold storage-related jobs have been added to the Laredo market and the community has seen a total investment of approximately $120 million.

Last year, of the $4.2 billion of produce imported through Laredo World Trade Port of Entry, nearly $1 billion was from avocados. In 2020, $4.5 billion of produce was imported across the Pharr-Reynosa International Bridge, which connects the U.S. and Mexico, and is a secondary port of entry for the company.

Mission Produce’s Laredo operations are expected to stimulate more Pharr Bridge crossings, generating additional income for the city. One hundred new crossings per week would raise an estimated $114,000 per year in bridge tolls – or $1.14 million in ten years.

“The Laredo facility was built for the future – we are ready to capitalize on the value the facility is expected to bring to our business and the industry with the significant volume moving through the city,” added Barnard.

“We’ve succeeded with this model in several of our other facilities by leveraging the space to effectively provide additional revenue for our business, and our Laredo operations are expected to continue to grow. We aim to propel the industry forward by leveraging our mega center at one of the nation’s busiest ports.”