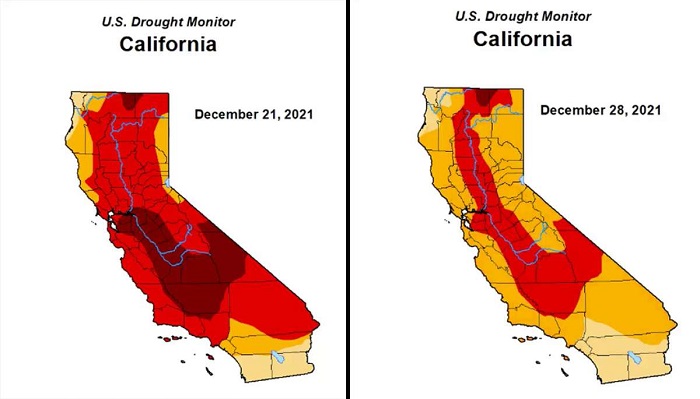 A new map from the federal U.S. Drought Monitor released Thursday shows the drastic effects of the past few days' storms on the severity of drought across California.

Almost the entire state is out of “exceptional drought” levels, though much of the central part of the state remains in “extreme drought.” The heavy storms during late December contributed to a record snowfall for the month, with the Central Sierra snow lab observing 193.7 inches of snow. The previous record was set in 1970 with 179 inches of snow during the month.

Conditions throughout the state could continue to improve in the following weeks, especially with above-normal precipitation predicted for Northern California next week, according to the U.S. Drought Monitor.

“Prior to the recent heavy precipitation this month, much of California was designated with extreme (D3) to exceptional (D4) drought,” Brad Pugh, a meteorologist for the National Oceanic and Atmospheric Administration that assists with the map, wrote in an email. “The recent heavy precipitation and favorable snowpack resulted in 1 to 2-class improvements in the drought intensity level, but 12 to 24-month precipitation deficits continue. Additional improvements may be warranted during the next couple of weeks.”

Even with these improvements, there is still no part of the state that isn’t in some level of drought.

The Drought Monitor, a joint effort of the NOAA, the U.S. Department of Agriculture and the National Drought Mitigation Center at the University of Nebraska-Lincoln, takes into account precipitation totals and also indexes a wide array of indicators, including groundwater storage, river levels, soil moisture, satellite-based assessments of vegetation health and more.

"It’s the tool to serve all purposes until you look at the nuances of where your water supply comes from and it becomes more complex," Jeanine Jones, California's drought manager with the state's Department of Water Resources, told SFGATE in a previous interview.

"While the map is probably most representative of conditions when it’s very wet or very dry, it’s everything in between that’s more difficult to depict."