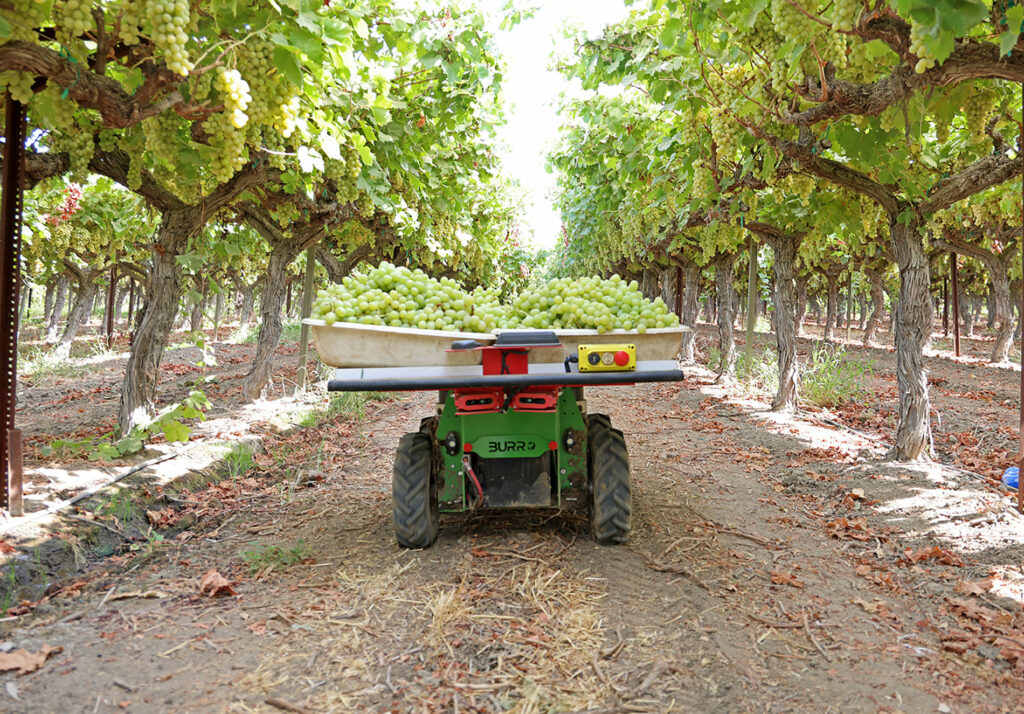 An autonomous table grape robot is to be featured at World Ag Expo in Tulare, California this week, as one of the winners of the Top-10 New Products Competition.

The Burro is a self-driven, four-wheeled ATV that has been tested on local table grapes — one of the most labor-intensive crops grown in the San Joaquin Valley.

The company’s CEO summed up the basic function of the Burro as aiding humans in the field in a September 2021 news release announcing a $10.9 million venture capital investment.

“Many autonomy companies beginning in agriculture have focused first on autonomous tractors, autonomous weeding, and harvesting, where they try to comprehensively automate incredibly hard technical tasks, and often struggle to scale into a large market — we’ve started instead with collaborative people-scale robots that help people by moving heavy things around,” said Charlie Andersen, CEO of Burro.

“The beauty of this approach is that we can scale today around a ubiquitous pain point in the most labor-intensive areas of agriculture, while also allowing our platform to capture data and learn about many environments — providing the foundation for us to scale to countless other applications.”

The company planned to use the money to expand to 500-plus robots this year to meet demand from both new and existing customers. As of September, it had 90 robots in table grape fields covering 100-300 miles a day autonomously. It eliminates the need for a farmworker to walk several miles a day with a 250-pound wheelbarrow full of grapes. Instead, they can stand in the shade, pick and pack fruit onto the Burro.

“Burros are already transforming worker productivity with one Burro enabling six-plus people to harvest up to 48 percent more fruit per day for a less than two month ROI,” according to the new release.

While it is scaling in the $3 billion table grape market and looking to expand into berries and nursery crops, it sees opportunities in the $1.2 trillion in US outdoor labor where automation can address pressing challenges.

Burro was formally known as Augean Robotics, a Philadelphia-based robotics company. Founded in 2017, the company boasts the only fully autonomous, plug-and-play, collaborative farming robot on the market. It’s listed with the World Ag Expo as a company with operations in Kingsburg, and its California sales and service team is headed by Chris Thiesen, who previously worked for vertically integrated Brandt Farms in Reedley, according to the Burro website.

Fresno-native and former Fresno High School chemistry teacher Josue Ortega teaches crews how to use the Burro, and Fresno State grad Noe Toribio is a sales and service representative.