The counterseason for Northern Hemisphere blueberry markets used to be almost the exclusive domain of Chile and Argentina, but Peru continues to forge its place in the market with aggressive volume and an extended export window.

After the Andean country shipped around 20,000 metric tons (MT) of the fruit in 2016-17, Sergio del Castillo of industry association ProArandanos Perú has told Fresh Fruit Portal that figure is set to rise to close to 40,000MT in the coming campaign.

This unfettered growth comes despite heavy rains in parts of the country in March.

While many Chilean growers have seen the rise of Peru as a threat, del Castillo highlights the southern neighbor continues to be the leader in the category. And the statistics show even with strong growth Peru's supply is still a small fraction of Chile's volume.

"Chile produces the biggest volumes, and it dominates the category and that period. Peru is trying to fill those spaces when Chile doesn't have blueberry supply," del Castillo explained.

"That's why we are trying to start the campaign as early as possible, in July, to concentrate on having the biggest volumes at time when Chile isn't producing." 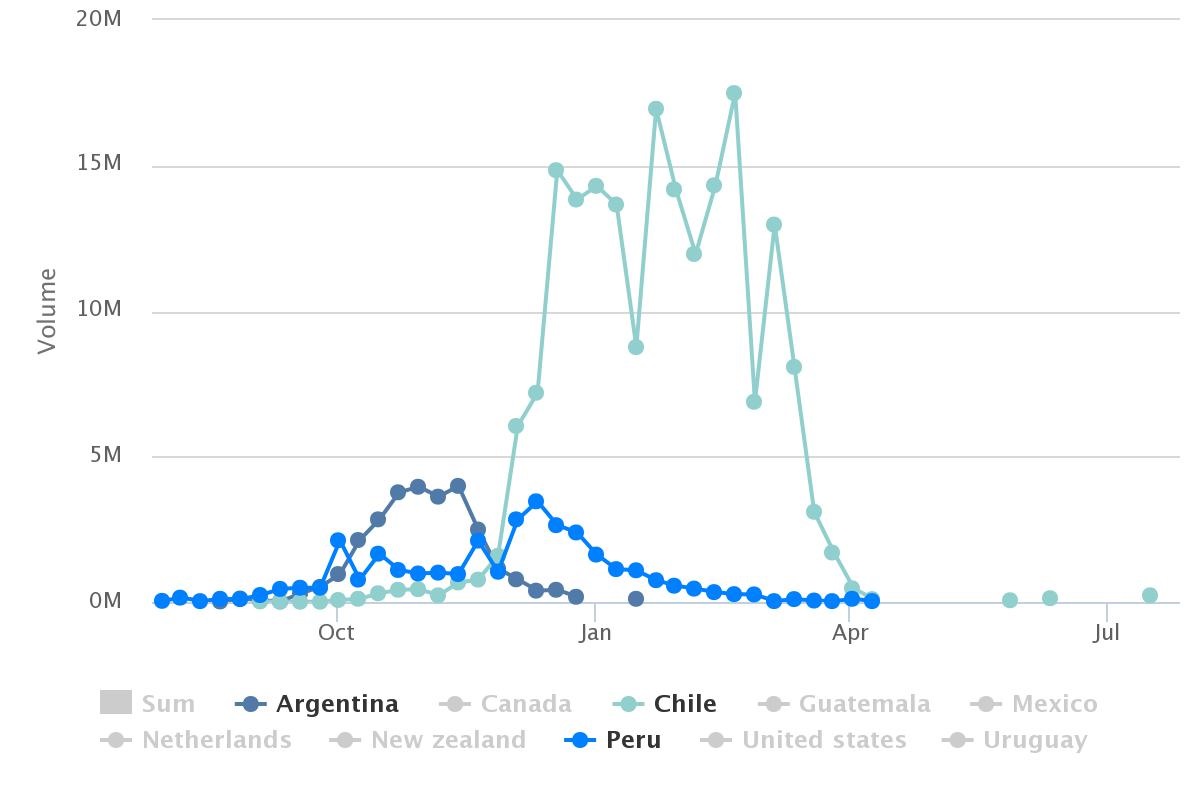 Peruvian, Chilean and Argentine blueberry arrivals in the USA during 2016-17 (in pounds). Graph courtesy of the IBO and Agronometrics.

The Peruvian executive highlighted the industry hasn't even been around for more than 10 years and only started in the export game around five years ago.

"We have a climate that offers the conditions for significant harvests and production. Our season is long, starting with small volumes in July, but those rise and are maintained until February," he said.

He said Biloxi remained the main blueberry variety in Peru, and while the main market was the U.S. the industry association hopes to see more diversification of markets this season.

"Our main buyer is the United States, followed by Europe. Now we are entering Asia as at the end of last year we signed a protocol with them [the Chinese] and in February we entered China with a small quantity of blueberries," he said.

"This season we'll arrive in the Asian country with larger volumes."