Chile, central Argentina set to be "drier than normal" this winter - FreshFruitPortal.com

Chile, central Argentina set to be "drier than normal" this winter 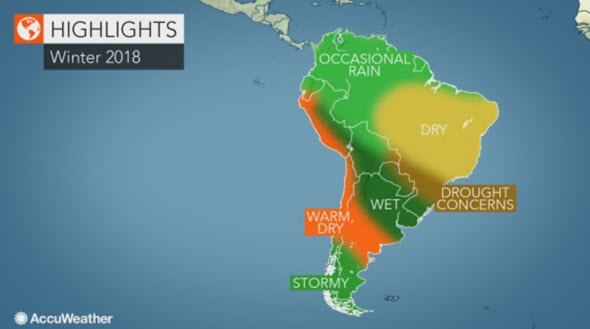 U.S.-based weather forecasting company AccuWeather has warned that a warm and dry pattern is expected in South America along much of the Pacific coast through Chile and into central Argentina over the winter.

It also said that dryness is set to bring drought concerns to Brazil, while rainy spells would likely cause localized flooding from Colombia to Uruguay.

"Dryness will be a problem across central portions of Chile and Argentina," said Jason Nicholls, AccuWeather senior meteorologist.

This will lead to increased drought concerns and reduced snowfall across part of the Andes Mountains.

While the season as a whole is expected to be "drier than normal", the greater chance for rain will come during the second half of the winter, according to AccuWeather. Wetter weather is forecast across the southern extent of South America.

"A steady parade of storms will lead to frequent [rainfall] across southern portions of Chile and Argentina," Nicholls said.

Over in Brazil, while winter is typically the country's driest time of the year, much of the country will be drier than normal this season. The dryness will result in a growing drought concern, especially in some of the southeastern areas.

"[These areas] will have rainfall on occasion but will be below normal which can lead to stress on crops," AccuWeather senior meteorologist Jason Nicholls said. The dry pattern will be accompanied by mild weather throughout much of the season.

Meanwhile, far southern areas, including the state of Rio Grande do Sul, will have occasional rainy spells as fronts move in from the south.

While much of the season will be dry across Brazil, spells of wet weather will dampen areas around Colombia and Venezuela.

"Far northern South America will likely experience enough rainfall throughout the season to avoid a recurrence of the severe drought issues that plagued the region back in 2016," Nicholls said.

Wet weather is also on tap for an area stretching from central Peru to the coast of Uruguay, leading to "frequent fronts and near- to above-normal rainfall." Heavy downpours that move through with these fronts could lead to localized flooding.