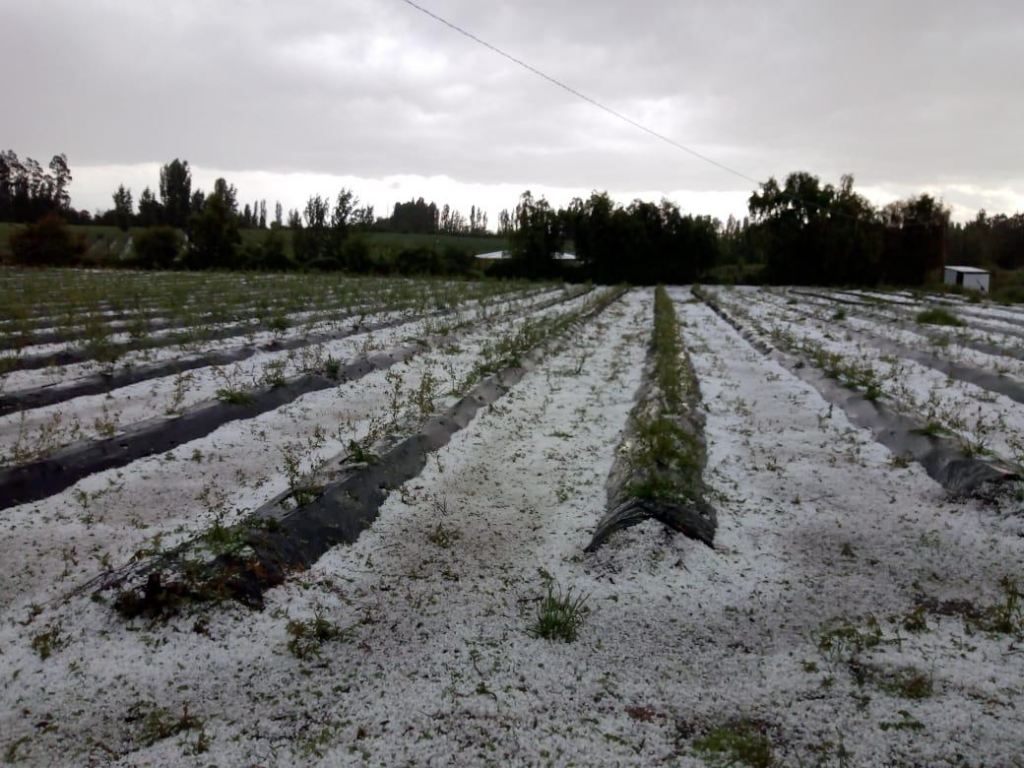 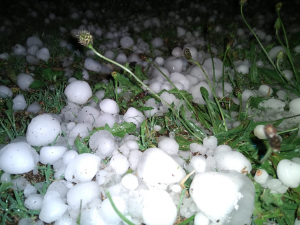 Unusually large hailstones, heavy rain, and strong winds hit the country's central-southern regions on Nov. 12, just as the harvests for the summer export season were getting underway.

Chilean Fruit Exporters' Association (ASOEX) president Ronald Bown said on Monday (Nov. 16) that there would be slight export forecast reductions for blueberries, cherries, stone fruit, kiwifruit, and table grapes, highlighting that some growers had lost all of their production.

Chilean Blueberry Committee executive director Andrés Armstrong said that O'Higgins region was one of the most heavily affected.

"The impact on exports should be comparatively low, due to the small blueberry growing area there is in this region, which represents about 7% of the total in Chile," he said.

"However, we must remember that hail was also reported in some sectors with large growing areas - in the foothills of the mountains in the Maule Region, in the areas of Longaví, Parral, and Retiro. The damages in other regions were isolated and of lower severity."

Preliminary evaluations indicate that around 2,000 hectares of blueberry production could be damaged, from the Metropolitan Region southward. Armstrong estimated that the export figure would be cut by around 4,200 metric tons (MT).

"There should be a drop of around 4%, and so the export volume for fresh will likely reduce from the 105,000MT initially forecast to 100,800MT. It is a small figure, but localized in early and mid-season production, and will impact shipments from weeks 46 to 48."

So far the Chilean blueberry industry has shipped 14% more volume than last year, with 1,905MT. Of these shipments, 66% have been sent to North America, 24% to Asia and 10% to Europe.

Meanwhile, the Chilean Cherry Committee, which prior to the hail event had forecast a year-on-year volume drop of 10.5%, estimates that the recent weather phenomenon will further cut the estimate by 7.1%. 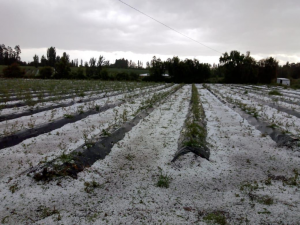 The table grape industry seems to have been spared severe damage.

"While we don't have a complete evaluation, giving the timing, we do know that the losses were quite limited, since for grapes in the sixth (O'Higgins) region the impact was centralized from the highway to the mountains, mainly."

Sat estimated exports for the coming season would be 2% lower than last season, but he said the reason for this decline was not the hail but rather the varietal reconversion taking place in the industry.

"There will be a significant reduction in traditional varieties which no longer have a market, such as Flame, Thompson, and Superior, and there will be a rise in propriety varieties," he said.

"We expect the first ship with Chilean grapes to leave in week 48 or 49. However, we are not in any rush, as there is Californian and Peruvian fruit in the market."

Finally, the president of the Chilean Kiwifruit Committee, Carlos Cruzat, said that it the initial damage estimate for the crop stood at 5%.

Cruzat highlighted that the biggest worry now was that the rains could have a negative impact on the production for the next season in severely affected orchards.