Berry prices lower for most categories in U.S. market

In this installment of the ‘In Charts' series, Cristian Crespo of Agronometrics illustrates how the U.S. market is evolving. Each week the series looks at a different horticultural commodity, focusing on a specific origin or topic visualizing the market factors that are driving change.

This week we're going to check out what's been happening with volumes and prices of berries in the U.S. market. In general prices are running lower than last year, with the notable exception of blueberries.

Blueberry prices over the previous few weeks have been running significantly higher than the last few years, escaping the usual downward trend in week 32, but saw a dip in week 39. However, prices still remain at their highest level in the last three years.

Looking at the chart below, we can see that in week 39, the average price was US$9.28 per kilo, which is up 14 percent year-on-year. Supplies are from Mexico, Peru, Washington and Oregon.

Prices of conventional blueberries (USD/KG) in the U.S. market 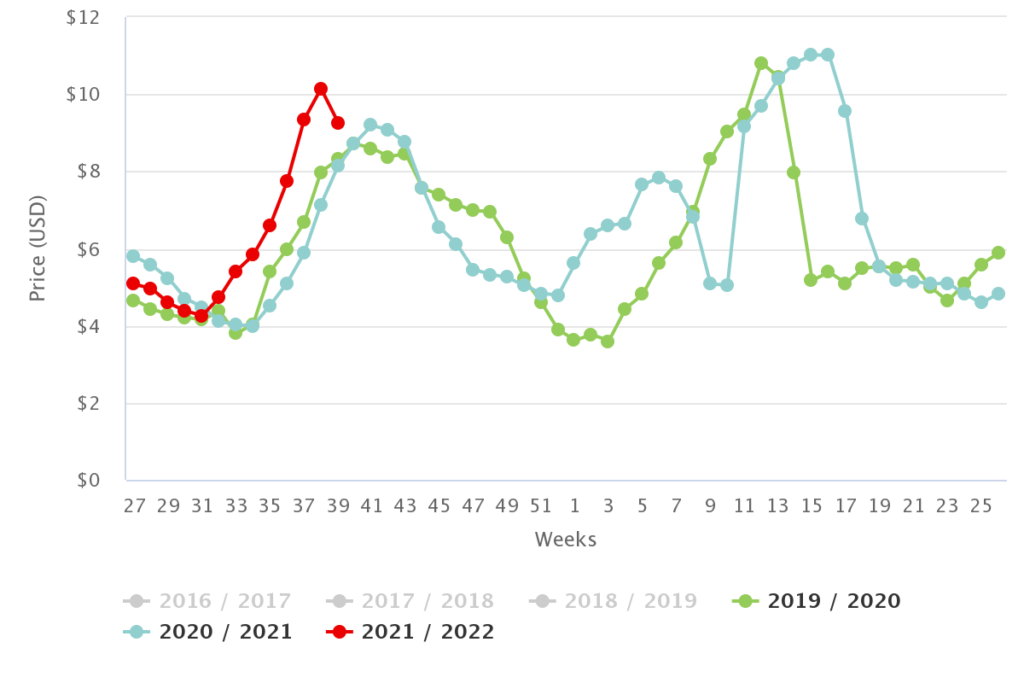 The higher prices come despite blueberry volumes being higher year-on-year in July and September.

In contrast to blueberries, raspberries have shown similar behavior to the previous season.

In week 29, the average price was down 9 percent year-on-year at US$7.55 per kilo. Supplies are from California and Mexico.

Prices of conventional raspberries in the U.S. market 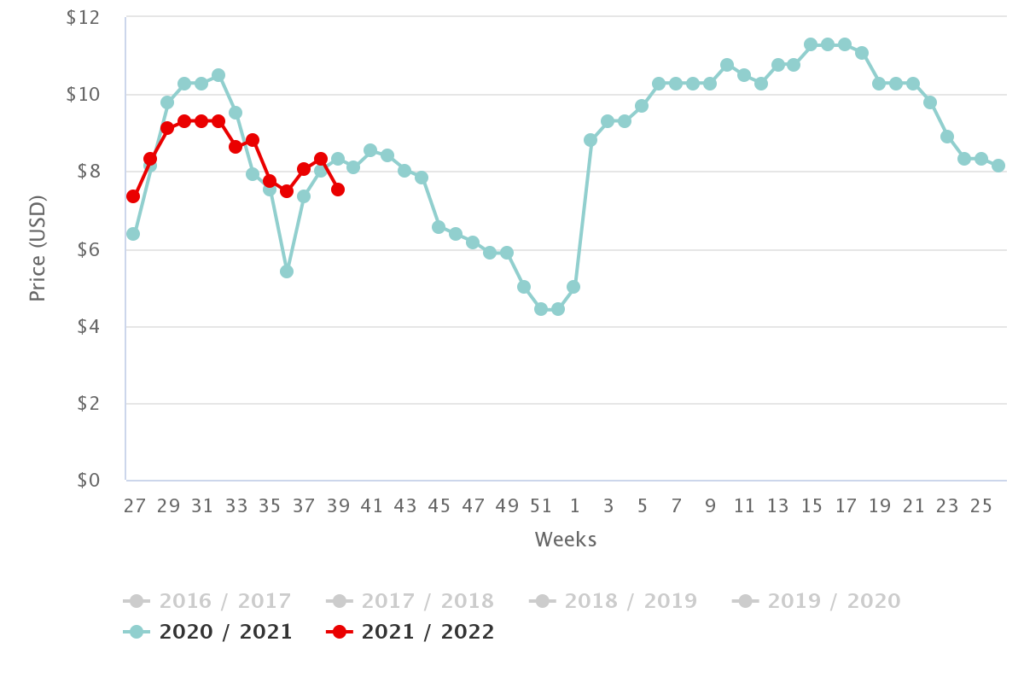 The prices of non-organic strawberries have seem a similar trend to previous years, with lows between weeks 27 and 32 and highs between weeks 33 and 36, only to dip once again in week 37.

Prices in week 39 were a whole 35 percent down year-on-year at US$3.17. Supplying regions are California, Mexico, Florida and North Carolina.

Prices of conventional strawberries (USD/KG) in the U.S. market 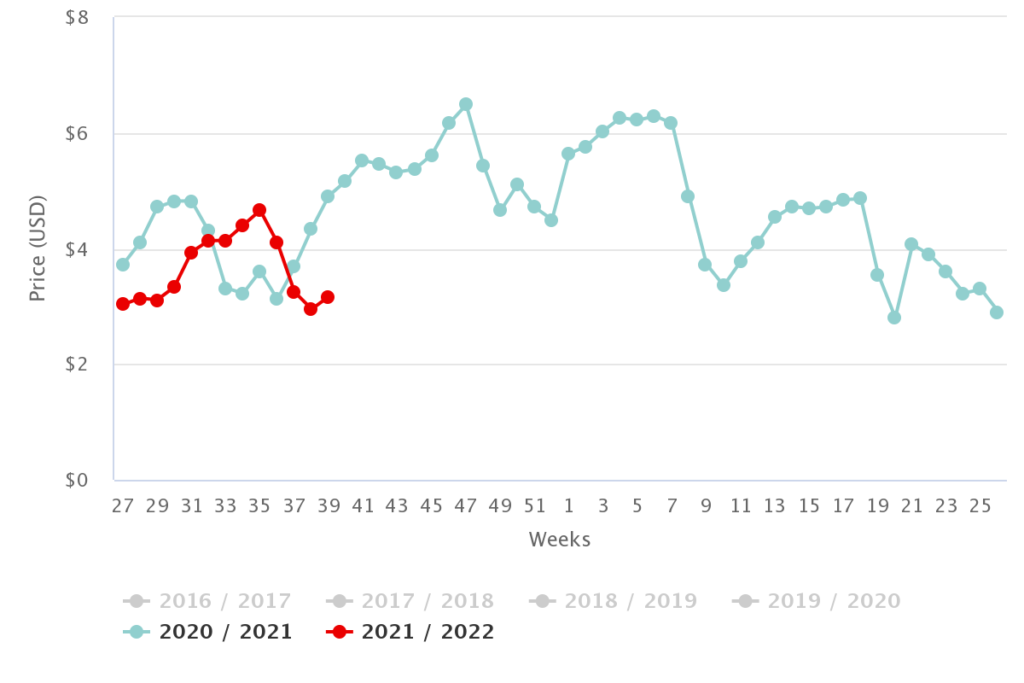 As with blueberries and raspberries, volumes of strawberries were higher year-on-year in July and September.

Prices of blackberries in the 2021-22 season have been significantly lower than those registered in past seasons, especially between weeks 31 to 37.

In week 39 the average price of conventional blackberries were 23 percent lower at US$4.87. Volumes were from California, Mexico, Central America, Georgia and North Carolina.

Prices of conventional blackberries (USD/KG) in the U.S. market 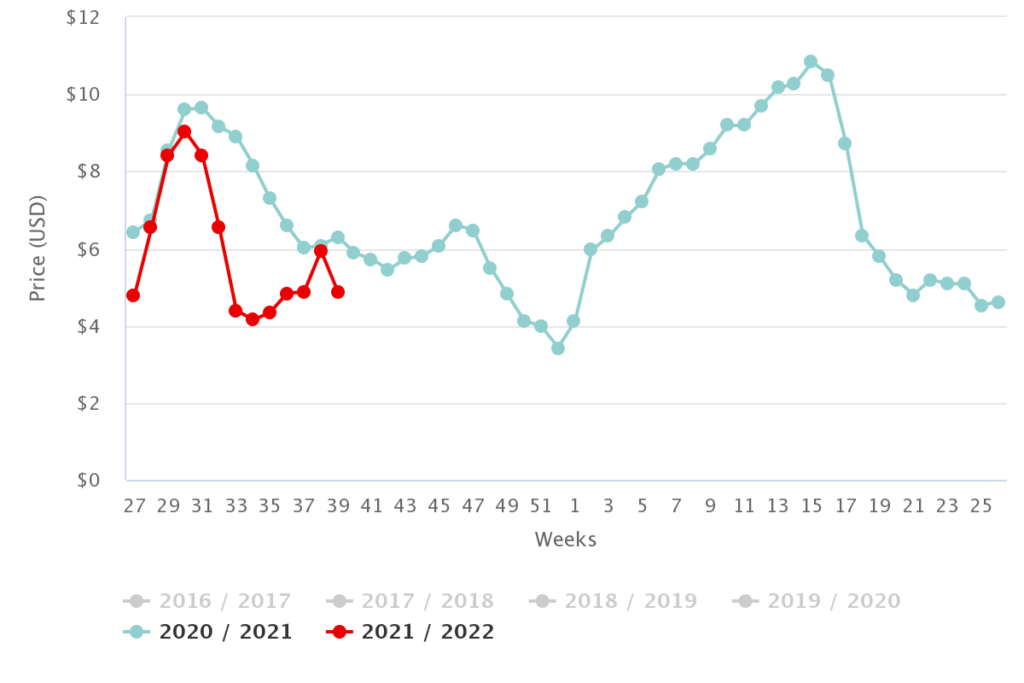 As with the other berry categories, blackberries saw higher volumes in July and September than the previous year.