In this installment of the ‘Agronometrics In Charts’ series, Sarah Ilyas studies the state of the apple season in the U.S.. Each week the series looks at a different horticultural commodity, focusing on a specific origin or topic visualizing the market factors that are driving change.

The United States is the second largest apple producer in the world, behind China, and grows approximately 200 unique apple varieties.

The United States has 5,000 plus apple producers who grow, on average, 240 million bushels of apples each year. These producers grow the apples on an approximated 322 thousand acres of land.

The USDA’s  apple production estimate for the 2022 apple season  is 10.1 billion pounds, up 3 percent from the previous year.

In New York, growers are expecting near-record yields after a mild winter followed by optimal growing conditions. A windy, rainy and frigid spring impacted the 2022 crop in Washington, with production expected to be down 4 percent from last year's already lower-than-usual crop.

The full crop is projected to be 108.7 million standard forty-pound boxes of fresh apples, down from last season's 122.3 million boxes, according to the Washington State Tree Fruit Association (WSTFA). Washington’s apple harvest is vitally important to the state’s economy, representing approximately $7.5 billion in annual economic impact.

2021 saw a record-setting heat wave in late June and early July that stunted the growth of tree fruit in the region. While last year’s apple crop was roughly the same as 2020’s 122 million-box harvest, both harvests were well below the 2019 statewide harvest of 134.5 million boxes.

In Michigan, production is expected to be up 68 percent following last year's crop that was damaged by frost. Growers are expecting some of the best yields since 2016, according to the report and many varieties are expected to be harvested ahead of schedule. 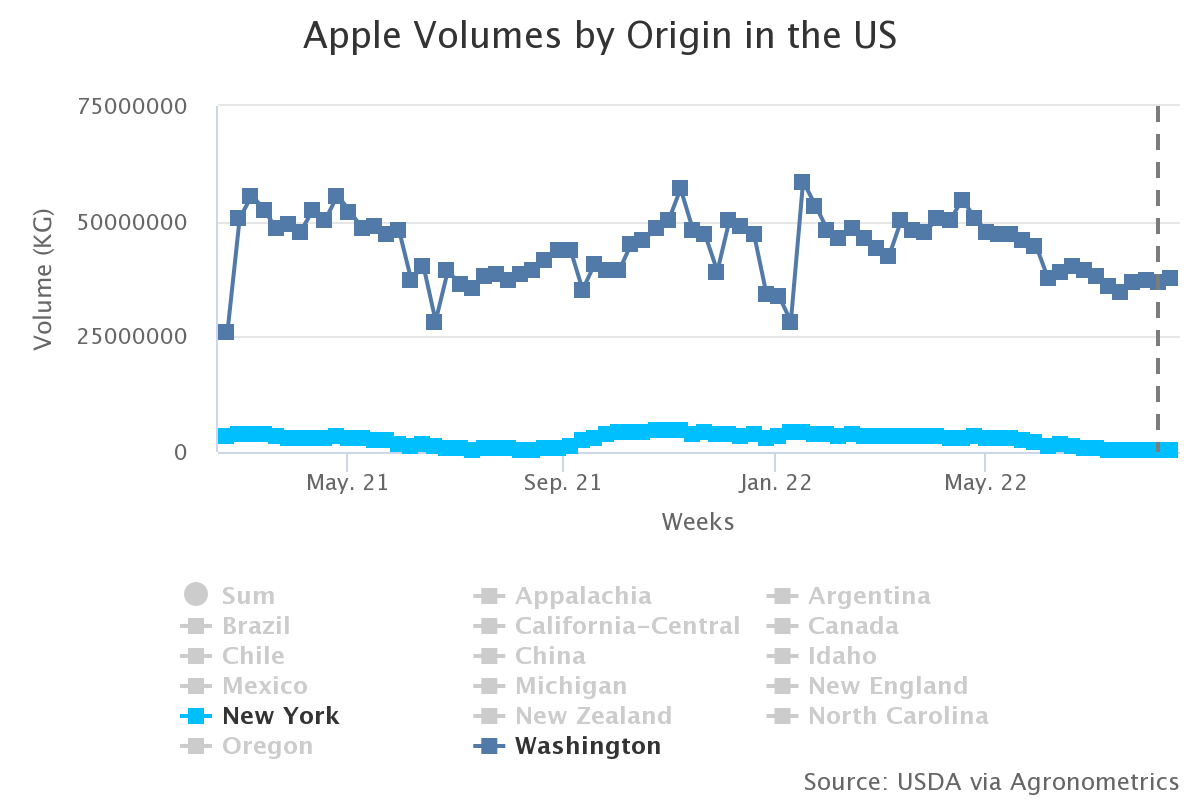 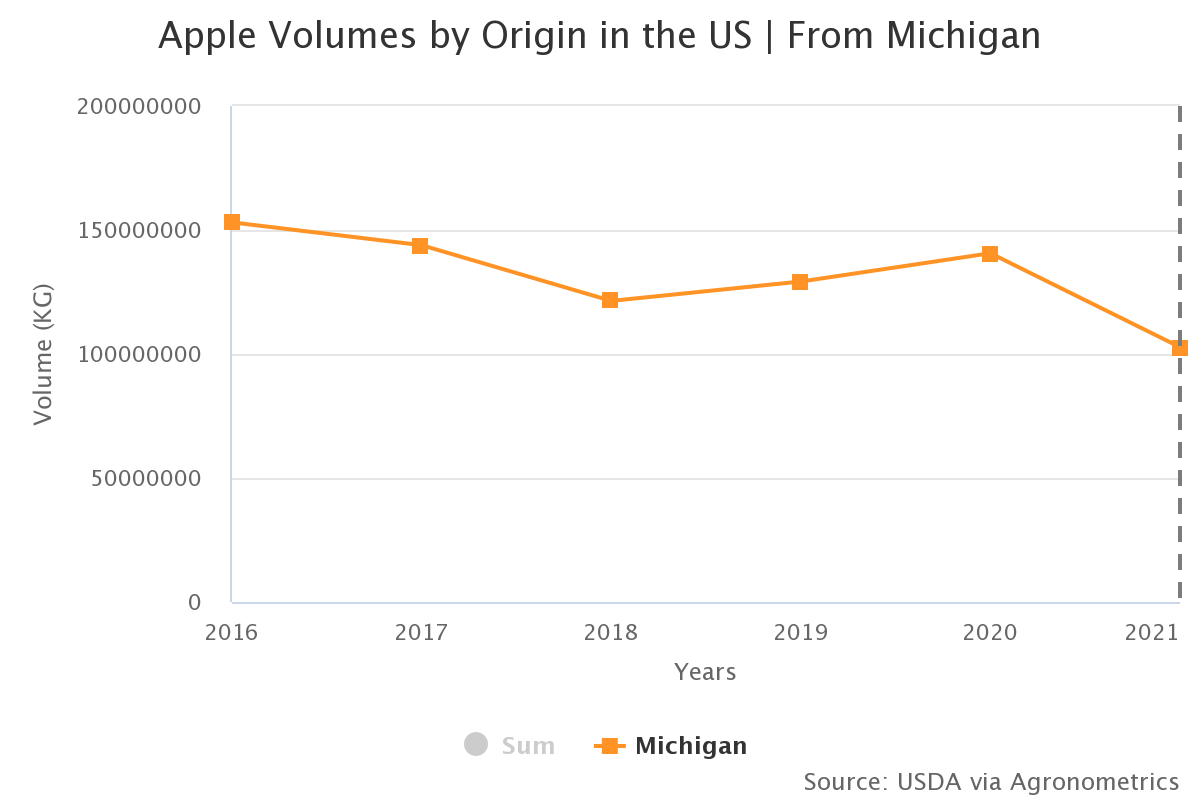 With lower volumes in the West and a majority of apple producers pushing for higher prices, growers’ and packers’ costs have surged and pricing this apple season is expected to be stronger. 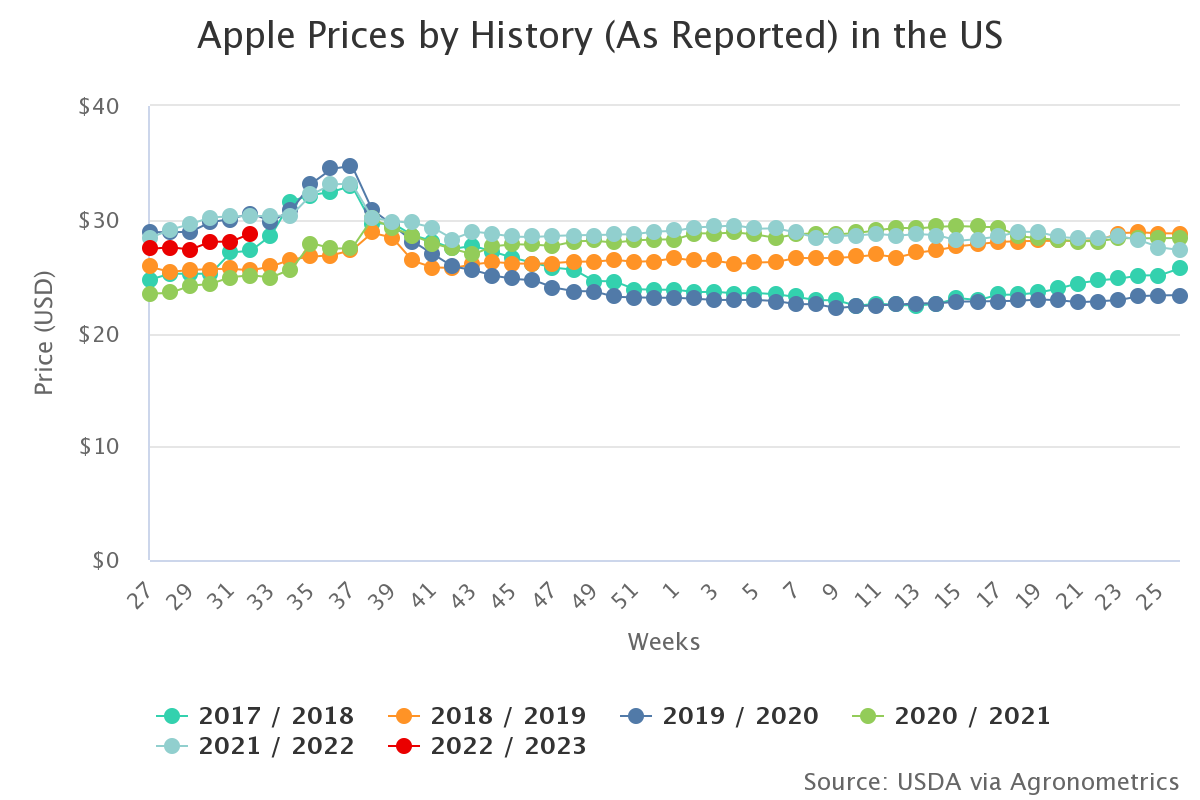 According to the Washington State Tree Fruit Association (WSTFA), Cosmic Crisp is 4.6 percent of the harvest, up from 3.2 percent last year. Gala leads production at 20 percent, Red Delicious and Honeycrisp are each projected at 14 percent, followed by Granny Smith at 13.4 percent, and Fuji at 12.7 percent of total production.