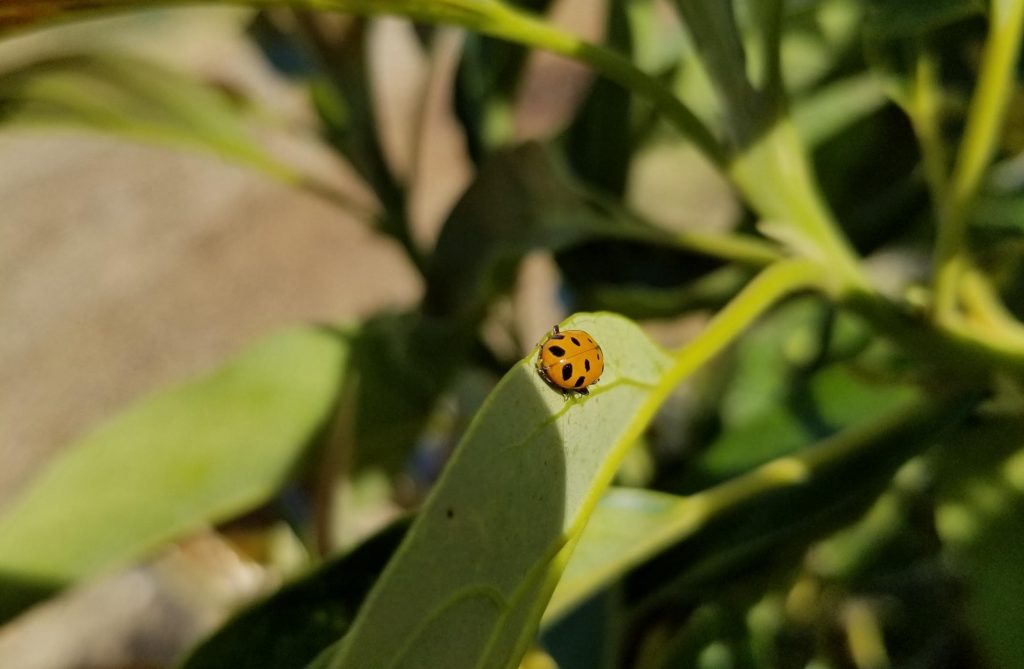 This article is part of a series on biological control and Integrated Pest Management written by UAV-IQ (www.uaviq.com).

I want to share the story of Chris Sayer, the manager of Petty Ranch, a lemon and avocado farm started by his family a little over 130 years ago in Ventura, California.

Chris is working in conventional production, but he’s been using a lot of practices usually associated with organic farming such as the use of cover crops to help build and protect the soil, the release of beneficial insects and implementation of integrated pest management as the primary tool for controlling insect pests.

He defines his way of farming as “resilient agriculture”, a set of practices that boosts yields in good years but also helps keep the trees healthy during drought or other stressful conditions.

Cover cropping, the foundation of resilient farming in orchards

Chris is a big advocate of cover cropping, a practice that he started to implement in his ranch in 2005. “I think they've [cover crops] done wonderful stuff for us. But in my area, I'd say they're only adopted on maybe 5% of the acreage”, he regrets, “I'd love to see that number get higher”.

Cover crops helped him with other management techniques such as the use of mulch to double the organic matter content of his soil. Even if it took about six years to see a big increase, the result is worth the patience.

He explains that “on our 50 or so acres it equates to about two and a half million gallons of water more we can retain in the soil for the use of the crops after the end of the rainy season.”

In his ranch, Chris is at the forefront of the impact of climate change. “I'm really worried about both heat spikes and the potential for freezes. An increase in average temperatures won't make a difference. It's the difference in the extremes that will make or break us”.

He said the primary means of adapting and trying to be ready to deal with those changes is to improve the soil’s organic matter in order to increase its capacity for holding water.

“I think for people who grow crops like I do it's the options of resiliency, being better able to tolerate weather extremes. I believe that part of the reason we've been able to get an extra 10 years out of some of our older lemon trees was because of the soil improvement that we've done," he said.

"The size of our lemons was dropping year after year as our trees got older. And then as we introduced the soil practices that sort of leveled out. Those got better, our size structure got better, even though the trees were still very old. Those differences pay for the cost of cover crop and those other practices for us.” 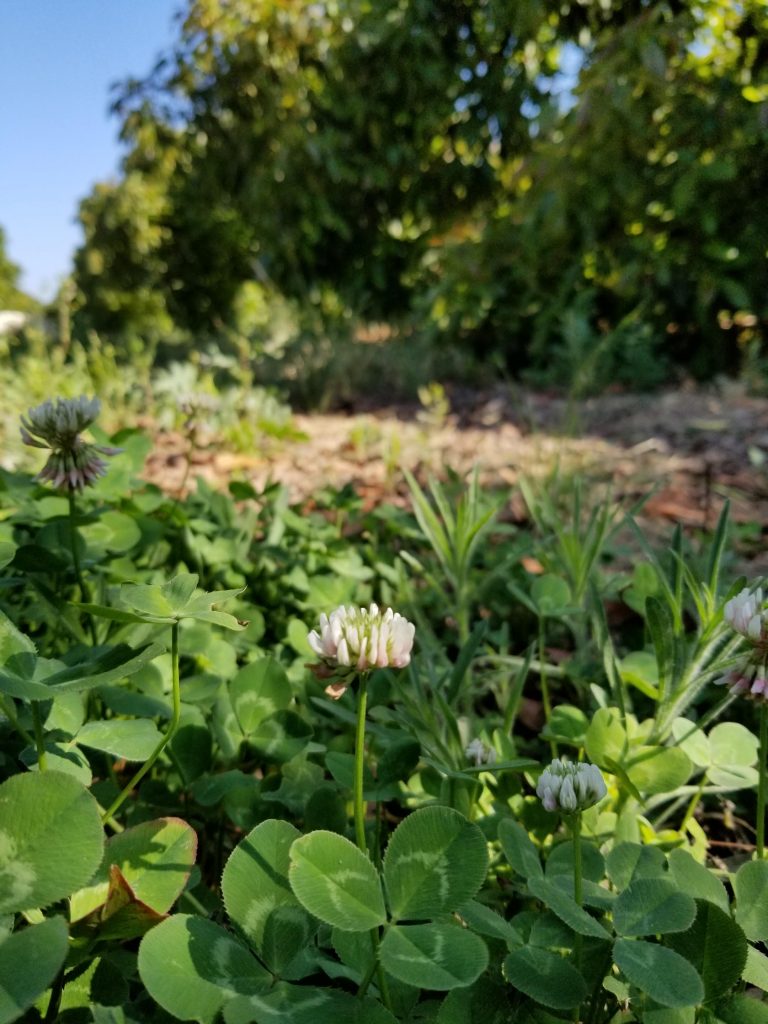 But the benefits don’t stop there. He reports that “we have found that the cover crop program actually seems to support the biocontrol program. It provides great habitat for just your common ladybugs which of course are great beneficial insects also.

"They'll come in and reproduce in the cover crop, and then head out into the orchard. We've found that to be very helpful in continuing to sustain our beneficial insect population, even for things like ladybugs and green lacewing that we don't release ourselves.”

Chris’s family is among the pioneers of augmentative biocontrol in open fields in California, as that practice has been used on his farm since the 1930s. They started using biological control as a solution to control the citrus red scale and yellow scale, using a parasitic wasp called Aphytis Melinus.

Since then they have implemented the periodic release of Cryptolaemus beetles, which is one of the most notorious predators of mealybugs (hence its surname of “mealybug destroyer”). To keep Persea mites under control, one of the most important pests in avocados, they release Californicus predatory mites, which also sometimes feeds on avocados thrips.

If the releases of beneficial insects and mites are regularly made to target specific pests, biocontrol can help prevent the development of secondary or new pests. This is especially true when the beneficials are generalist predators.

He comments that “one of the nice things about the Cryptolaemus beetles and the wild ladybugs is that they're such general-purpose predators, that if they don't find what we release them for, they'll find something else to eat".

"In fact, I've heard from some of the entomologists at the University of California that it looks like Cryptolemus and ladybugs also feed on Asian citrus psyllids. One of the things that are perhaps in part responsible for why the spread of the psyllid and the spread of citrus greening (HLB) has been relatively slow in Ventura County, is that we have this tradition of Integrated Pest Management (IPM).

"There's a big enough population of predators and parasites here already that were basically just waiting to eat the psyllids that it's been harder for them to get established.” 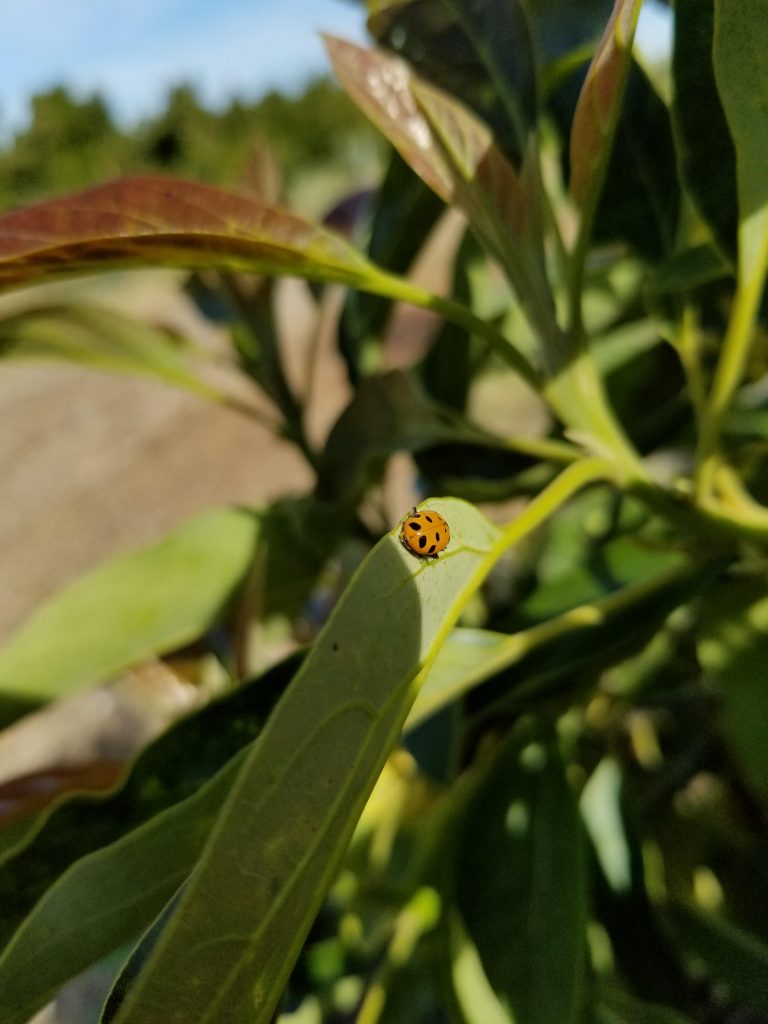 Ladybug hunting for prey on a young avocado tree

Biocontrol is a practice that has been well-integrated for a long time on his farm. His advice to new practitioners is to really think carefully about how they balance the beneficial insect releases and the spray control as “you don't want to end up paying good money for the biologicals and then just kill them with something else that's also expensive”.

Trying to figure out what the right cycle is and how to keep that in balance can be tricky.

“Fortunately, we've got a Pest Control Adviser (PCA) who both oversees our biological releases and writes the spray recommendations. It definitely takes a very knowledgeable PCA. I do not think I could do it without the assistance of Associates Insectary”, he admits.

But if a careful implementation is required, like with any other practices, Chris highly recommends biological control. He reports that “one of the things that the growers’ own co-op insectary we are part of, Associates Insectary, has seen over the last 15 years for the growers that they work with, is a steady and progressive decline in the amount of materials they have to apply per acre in overall quantities.

"And also, sometimes they can use a softer material than what they might've had to use before. So over the course of years, it definitely adds up”.

The decision to use IPM and biocontrol at Petty Ranch is primarily based upon observed effectiveness and return on investment. But even if some farmers are not that interested in biological control for some reason, Chris believes it is the direction the industry as a whole is going to take because of increasing pressures from regulators, from neighbors and from consumer concerns.

“I think the ability to spray conventional chemicals as frequently or as intensively as it has been possible in the past, might be going away. So it would be a good thing for people to be able to experiment with biocontrol and be ready to implement it.”

Working with a knowledgeable PCA and IPM expert is crucial to ensure the success of an IPM strategy implementation, but Chris has also learned a lot on his own and recommends the information on the Associate Insectary’s website to get some preliminary information on the topic. He also recommends that following a few accounts focused on this topic on social media can be a great way to interact with experts, especially on Twitter where he is very active.

Are you using cover cropping or biocontrol in your orchard? Reach out to us, we’d love to hear your story and write about it!

Check out other articles in this series: