Suez Canal: Ever Given partially refloated, raising hopes of reopening

Ever Given partially refloated in Suez Canal, but salvager warns: 'Don't cheer too soon' 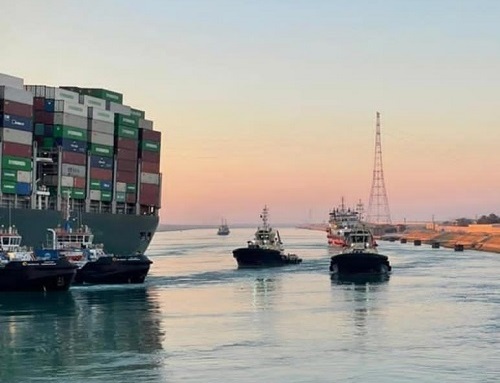 Update March 29: The Ever Given has been freed and is now sailing again, the Suez Canal Authority (SCA) has confirmed. Tug boats had spent several hours on Monday working to free the bow of the massive vessel after dislodging the stern earlier in the day.

The ultra-large container ship that has blocked the Suez Canal for almost a week has been partially refloated, raising hopes that one of the world’s most important trade routes may soon reopen.

The Suez Canal Authority said on Monday that it aimed to refloat the Ever Given on Monday morning after the back of the 220,000-metric-ton ship moved away from the west wall of the canal.

“We have floated the ship by 80 percent because the bow is still partially stuck,” he said. A high tide is expected at 11.30am local time, at which point the authority hopes to be able to float the ship fully.

But the chief executive of Boskalis, owner of salvage company Smit that is working on the rescue, urged caution over the timeline for reopening.

Peter Berdowski told Dutch radio on Monday that completing the operation would not be “a piece of cake”, according to Reuters, and said: "Don't cheer too soon".

He warned that containers may still have to be lifted off the vessel — a complicated and lengthy process given the ship’s location — as the bow remained stuck.

Osama Rabie, head of the Suez Canal Authority, told Sky News Arabia that traffic through the canal would resume after the boat had been completely floated, but did not say what would happen if the bow remained problematic.

Once the ship is fully afloat, it will take around three-and-a-half days to clear the traffic jam of ships, he told Egyptian TV.

While it is unclear what the impact on perishables trade is, it is likely that some of Europe's fresh produce imports will be affected, such as table grapes from India and other fruits from Asian countries.

Shipping group Maersk said the disruptions in the global shipping industry caused by the Ever Given’s stranding could take weeks and possibly months to clear.

"Even when the canal gets reopened, the ripple effects on global capacity and equipment are significant," the world's largest container shipping company said in an advisory statement for customers published on Monday.

"Assessing the current backlog of vessels, it could take six days or more for the complete queue to pass," it said.

The partial refloating of the vessel came after intensive efforts to push and pull the vessel with 10 tugboats when the full moon brought spring tide.

The MV Ever Given, longer than four football fields, was wedged diagonally across the Suez Canal since early last week, towering over nearby palm trees and strangling world supply chains.

The crisis forced companies to choose between waiting or rerouting vessels around Africa, which adds a huge fuel bill, 9,000 kilometres (5,500 miles) and over a week of travel to the trip between Asia and Europe.

A canal official, who also requested anonymity, told AFP that the team on the ground had started technical checks, and were reassured that the ship's motor was working.

Overnight, several dredgers had toiled to vacuum up 27,000 cubic meters of sand and mud around the ship. Another powerful tugboat, the Italian-flagged Carlo Magno, arrived at the scene to join the work Monday, and the flotilla would now focus its efforts on the front of the ship, said Berdowski.