By week 23, a total of more than 289,000 metric tons (MT) had been shipped to destinations. Globally, this represents 37,000MT less year-on-year, representing an 11 percent decline. However, not all Southern Hemisphere countries have acted in the same ways.

Argentina: More lemons to the U.S. 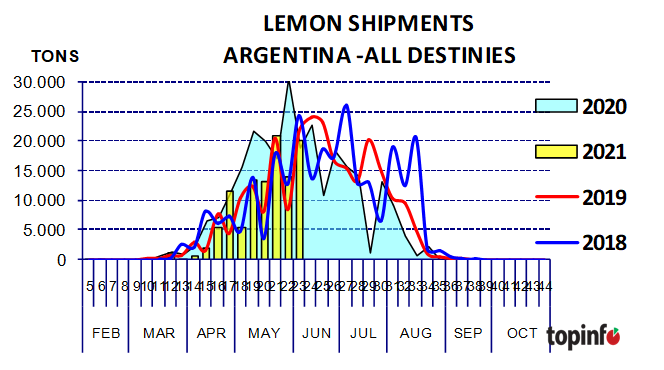 Argentina started its season in mid-March but with a slower beginning shipping rate than last year. To date, the country has shipped 69,000MT less year-on-year. But the most notable thing this season is the change in its destinations. Last year, Western Europe occupied first place with 60 percent of the shipments and the U.S. had six percent. This season, Europe occupies 21 percent, while the U.S. has 40 percent. 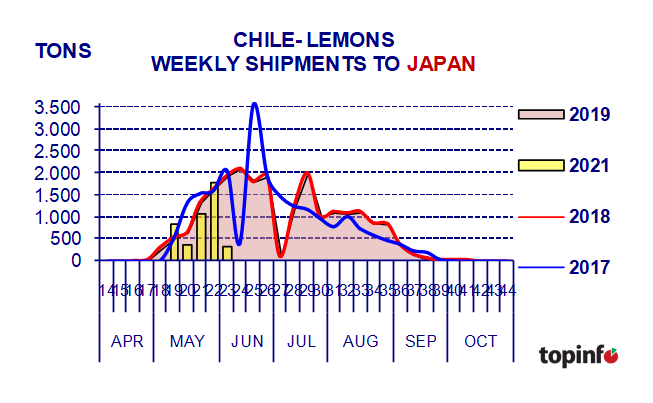 Chile began its season in the second week of May, which is the usual date for the country. Its initial shipping rate was fairly normal for three weeks, then increased considerably. As of now, it has shipped almost 4,000MT  more year-on-year. It is worth noting that a higher initial volume is destined for Japan and China while a lower volume heads to the U.S. and South Korea.

South Africa: Less lemon to the Middle East and more to Russia 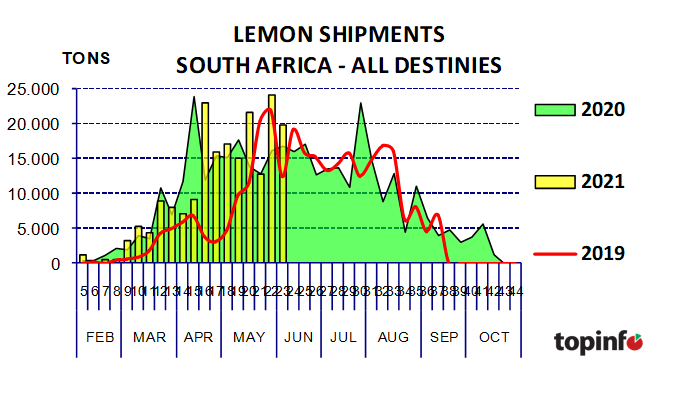 South Africa started its season at the end of January which is normal, but only in mid-April did it significantly increase its shipment rate. To date, it has shipped about 27,000MT more year-on-year. The changes in the proportion of its destinations do not seem to be significant. Compared to last year, the Middle East fell slightly and Eastern Europe (Russia) increased almost proportionally. 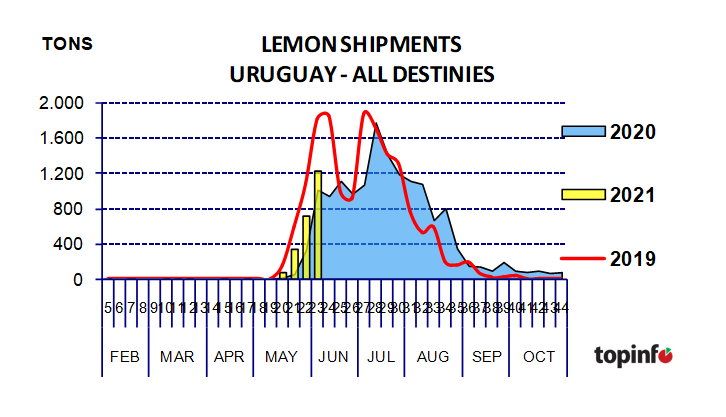 Uruguay usually begins its season at the end of May to the beginning of June, and this year there was no exception. A larger volume has been exported year-on-year and the proportion of its shipments to Western Europe increased, to the detriment of the U.S. as a destination.

U.S.: There is a significant supply of Southern Hemisphere lemons, however, there is less lemon supply locally and from Mexico. Additionally, there is a boom in demand due to the reopening of the foodservice sector which was closed last year and favors medium and small sizes. In general, prices remain high and on the rise.

Europe: The situation is complicated due to the increased production of the Spanish lemon which is seeing a great supply of good size and quality. Normally the Spanish lemon doesn't see quality nor sizes that are in demand by the market. For now, however, there is a growing interest in southern lemons to meet the most demanding customers.

Russia: The season started with low prices due to significant arrivals from South Africa, which this year is more present than others. Thanks to lower Argentine shipments, the market recovered slightly and prices are currently average compared to the last two years.

Avoiding saturation of the market

The final word, however, will be the weekly rate of shipments and arrivals. All optimistic forecasts or estimates are useless if the weekly rate of arrivals is altered excessively, saturating the markets. Special attention will have to be paid to the arrivals planned for July in the U.S.