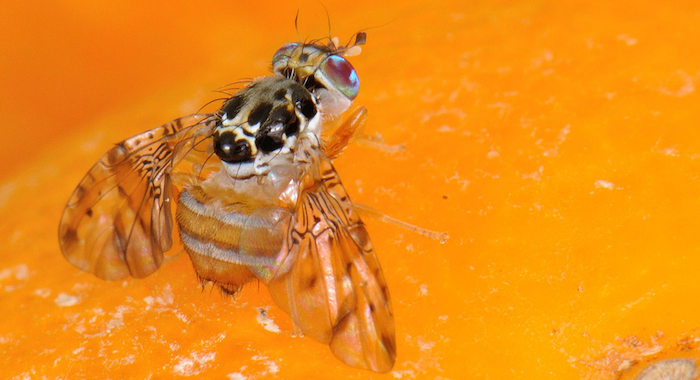 After a recent outbreak of the Mediterranean fruit fly (Medfly) in Mexico, the Joint FAO/IAEA Center of Nuclear Techniques in Food and Agriculture have assisted national plant protection authorities in developing an emergency action plan to contain and eradicate the pest.

According to a report by the Food and Agriculture Organization of the United Nations (FAO), the plan uses the Sterile Insect Technique (SIT), one of the most environment-friendly insect pest control methods. It consists of gamma rays irradiating and thus sterilizing male medflies.

While they remain sexually competitive, they cannot produce offspring. They are mass-reared, sterilized and released into the wild to mate with females, decreasing the population over a few months’ time.

Both FAO and International Atomic Energy Agency (IAEA), who already eradicated the dangerous pest in the 1980s in Mexico, assisted the country once again to design a new mass-rearing facility capable of producing one billion sterile flies a week. Inaugurated in 2021, this facility is the world’s second largest.

Maritza Juarez Duran, Director of the National Fruit Fly Programme of the Mexican National Service of Health, Food Safety and Quality (SENASICA) said: “The detection of this pest in Colima in April 2021, [...] was alarming and we value the IAEA’s and FAO’s support in helping us bring it under control.”

So far, 1.2 billion sterile male flies produced in the facility have been released over Colima’s outbreak areas. The FAO/IAEA-led panel has recommended continuing the release of sterile flies until June 2022 in order to eradicate any remaining pest population pockets.

“Mexico’s response to the medfly outbreak in Colima was quick, professional and efficient. Their technicians are experienced in applying the SIT thanks to the long-standing cooperation Mexico has with the IAEA and FAO in using this technique,” said Walther Enkerlin Hoeflich, FAO/IAEA entomologist.

In April 2022, Enkerlin Hoeflich, who supports medfly control programmes across Latin America and the Caribbean, traveled to Colima. He led a panel of experts to verify that the activities undertaken by Mexican authorities were implemented following international standards and to recommend actions to improve the operation.

“The Colima operation is on track and for now the outbreak is well under control. We’ll continue to work with Mexico to ensure the livelihoods of farmers remain secure from this devastating pest,” he concluded.

The Medfly, which lays its eggs in fruits and vegetables and after they hatch, with larvae feeding on the pulp, is considered among the most devastating insect pests worldwide. Outbreak can lead to strict quarantine restrictions on fruit and vegetable trade which have enormous socio-economic consequences for exporting countries.

Therefore, with Mexico estimating that it produces over USD 9.4 billion worth of horticultural crops for export every year, and as the world’s seventh largest exporter of agricultural products, maintaining a medfly-free status is very important. In the Colima outbreak, medflies were recorded affecting tropical almonds and some other fruits in urban areas.