Netherlands-based Dutch Food Technology has developed a machine that supermarkets' customers can use to slice a pineapple of their choice and take it home in a plastic tub. 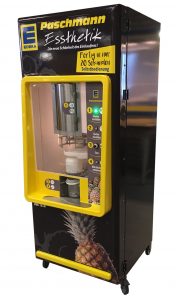 Sales manager Michel van Keeken told www.freshfruitportal.com the idea for the machine, named Piñabar, came about four years ago when the company was approached by a retailer that asked if they could develop such technology.

"We started developing it and we have improved it over time," he said.

The representative said the first machine could only do cylindrical cuts of the pineapple, but now the fruit can also be cut into pizza-like slices, providing the consumer with fresh, ready to eat fruit.

Since the product was launched in 2012, van Keeken said supermarkets have reported a significant uptick in pineapple sales.

In Spain, Dutch Food Technology carried out a study with major supermarket chain Carrefour throughout 2015 and found that pineapple sales increased 85%. It is estimated that with promotions alongside the machine, pineapple sales could increase by up to six-fold.

"They had 10,000 sales more, in just one store, thanks to the machine," van Keeken said, adding an additional 10 Piñabar machines had been ordered by the supermarket this year. 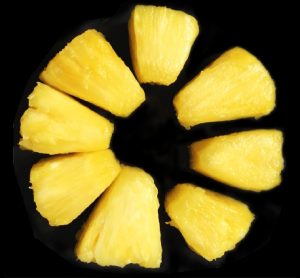 Another study was carried out in a store of German supermarket chain Edeka, and weekly average sales of around 80 pineapples shot up to 400.

He also explained that with the machine supermarkets were able to offer an experience to customers, in which they selected their own fruit and place it in the Piñabar themselves.

Edeka has an exclusivity agreement with Dutch Food Technology to use the machine in Germany, and a similar deal was recently made with U.S. pineapple company Chestnut Hill Farms, which will sell fruit along with the machine to its clients.

"I think this model is very interesting for them as growers since the machine will undoubtedly help them to sell more pineapples. It will be beneficial for them, for their clients, and for us," van Keeken said.

The first machine arrived in the U.S. in October, and four more are expected to arrive in December.

"We expect that next year there will be an explosion in our sales. We believe that this is a really revolutionary machine, that has already demonstrated excellent results," he said.

The Piñabar is currently in use in Spain's Carrefour, the Netherlands' Albert Heijn and Jumbo, Finland's K-citymarket and Australia's Favco.