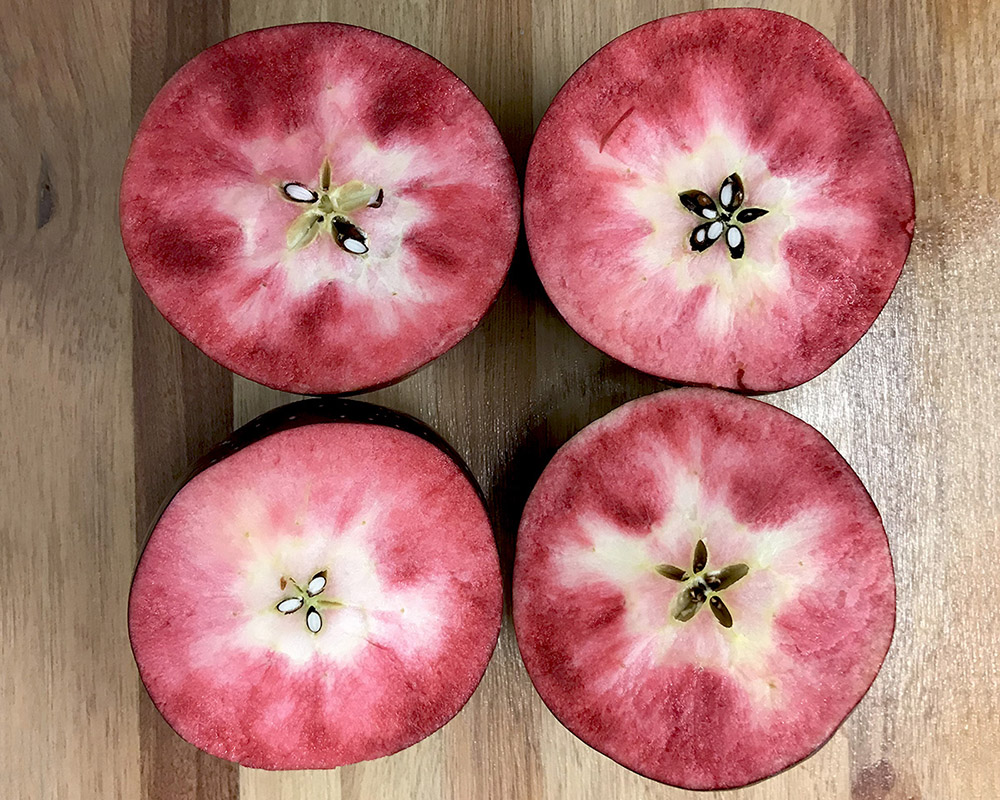 Companies in Southern Hemisphere countries have harvested their first red-flesh apples, which have been developed under the Kissabel project. 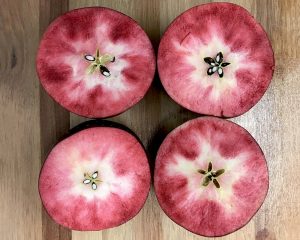 The naturally developed apples have colored flesh ranging from pink to intense red. French breeder IFO says that as well as color, the apples also differ in terms of taste and harvest timing from other varieties.

The varieties are being produced by the consortium's 14 members around the world, and the aim for the Southern Hemisphere members is to harvest the first commercial crop within the next three years, according to a release.

“We learned about red flesh apples in 2011 when we were invited to join the IFORED Poject in order to create a unique kind of fruit, clearly distinctive from all the other genetic developments. Our first challenge was to find the right growing area to get a bright red internal color," says Riccardo Gatti, production and planning head of Unifrutti.

"Today, after several seasons of evaluations, we have selected the Southern area of our apple growing region. During this winter we will move from testing orchards to semi-commercial orchards. We’ll have the chance to run the first commercial trials and storage tests from summer 2020.

"With the yearly release of new selections, we expect further improvement on fruit quality and storage performances in order to offer to consumers all over the world an outstanding family of Kissabel® apples”

In Australia, the production is located in Taggerty (Southern Victoria) and Legana (Northern Tasmania).

“Growing conditions in Southern Australia over the summer were very warm and dry. The result across the whole apple category was fruit with lots of natural sugars," says Rowan Little, general manager of Montague Fresh.

"This was also the case with the Kissabel® fruit which showed Brix levels up to 17. In Southern Victoria, the best performing varieties exhibited great red flesh color and a sweet/acid flavor with lots of berry tones. In Northern Tasmania, we had apples with firm sweet flesh with a balanced flavor”.

He said results in Southern Victoria were promising enough to suggest grounds for commercial production of one variety.

Initially, the fruit will be targeted domestic Australian market, but Asia will also be a focus, he added.

“We are excited about the potential of the Kissabel range on the market. Australian consumer interest in new fruit brands is strong and the Kissabel range represents a big divergence from the other apple varieties available," he said.

Tanith Freeman, product development manager of Dutoit Group said that ever suffering from the worst drought in over a hundred years in the Western Cape, several Ifored selections managed to produce "good fruit with nice red flesh coloration."

"We are excited to match the genetic variation in the program to the correct microclimate to produce the best fruit quality,” she said.

Besides the Southern Hemisphere countries, North America is also taking steps to market red flesh apples. The consortium's U.S. and Canada partner, The Next Big Thing cooperative, plans to move forward with a Kissabel variety and plans to eventually introduce it into the North American market.