Blueberries in Charts: Chile fetches high opening prices, but how might the season play out? - FreshFruitPortal.com

Blueberries in Charts: Chile fetches high opening prices, but how might the season play out?

One of the best examples of the relationship between prices and volumes in fresh produce can be observed in blueberries, as demonstrated almost perfectly by the chart below. With prices in October closing out at the highest level we have seen since 2015, this article will explore what kind of scenario we might expect of Chile in the coming months.

US Blueberry Prices and Volumes 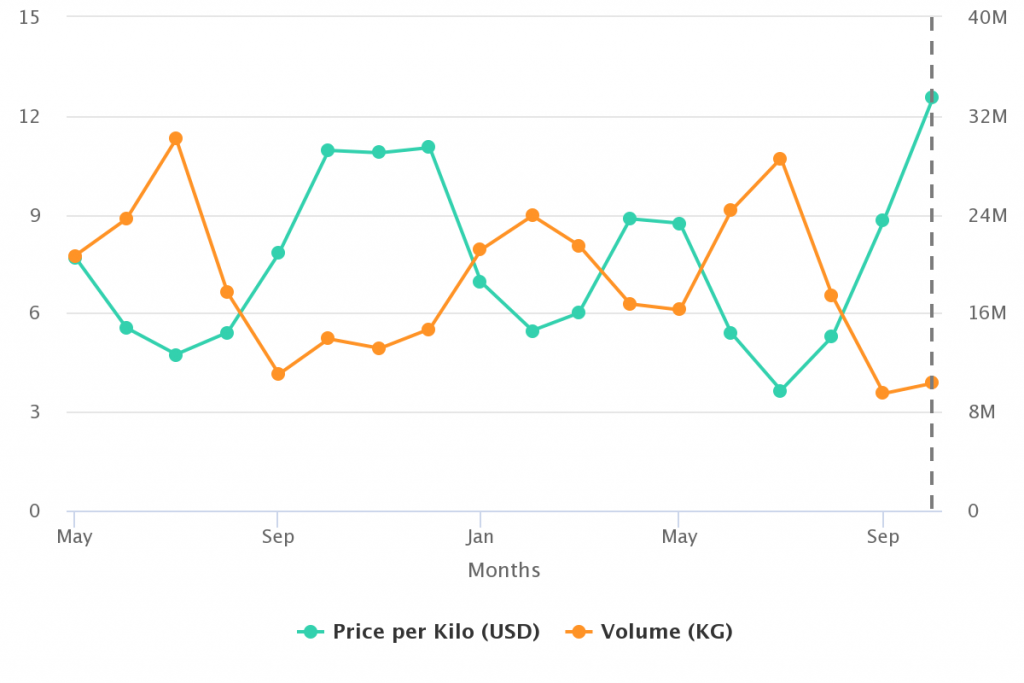 Let’s set the scene a bit. Chile is nestled in a strategic spot, completely countercyclical to U.S. production. Until recently, it pretty much had the run on the market during the U.S. winter months, only really contending with Argentina in October and November before Florida starts up again in May. It's only in the last five years that we have seen significant competition encroaching in, introducing Peru at the beginning of the season and Mexico right at the end.

US Blueberry Volumes by Origin 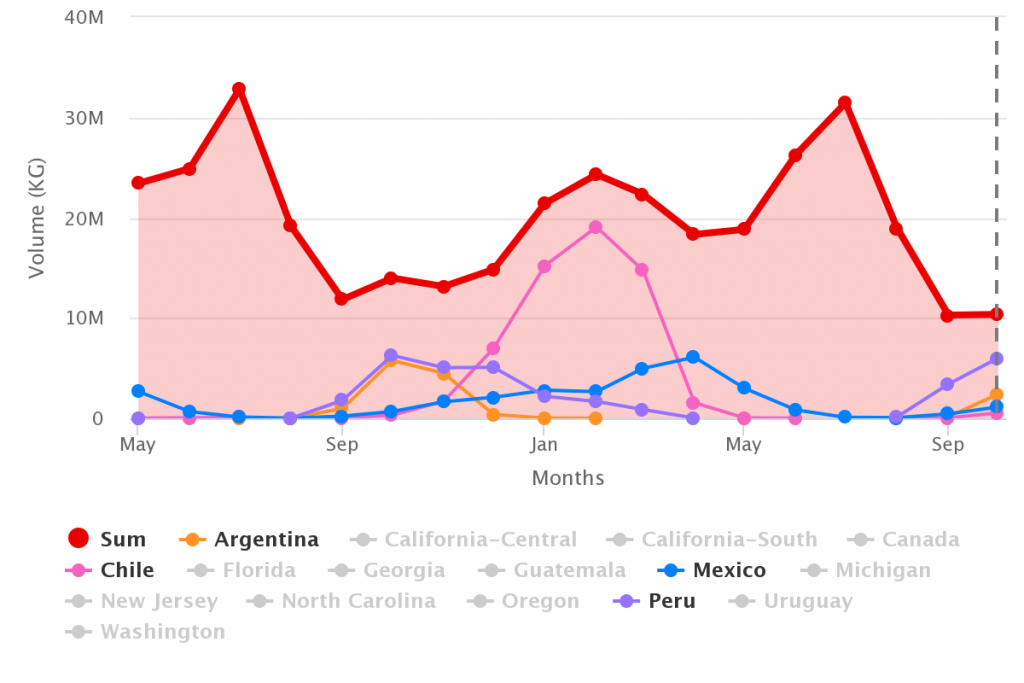 Considering the relationship between price and volume we saw in the first chart, it can be argued that the filling of the windows of opportunity by Peru and Mexico have been making prices more stable. An example of this stability is the reduction in massive price spikes such as those experienced during the 2013-14 seasons, which used to be much more common. 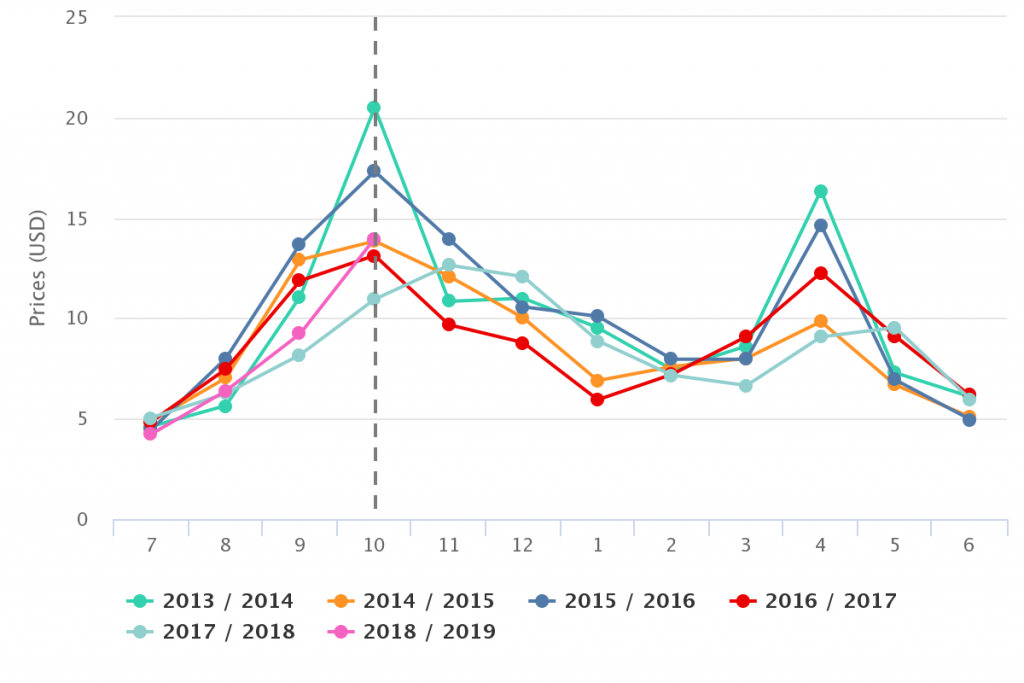 Although all volumes that arrive on the market will have an effect on the price, the historic trends have for the most part held up. Chile’s season typically starts in November, with prices dropping as volumes increase, hitting about half of their initial value towards the end of the season in March, when quality wanes. In the last five years, however, the prices at the beginning and at the end of the season have remained stable, indicating increased demand which possibly didn’t exist before. Where other origins have complemented the bulk of Chile’s supplies, the market has seen a marked dip in prices, indicative of a more established demand curve dealing with unexpected concentrations in volume. 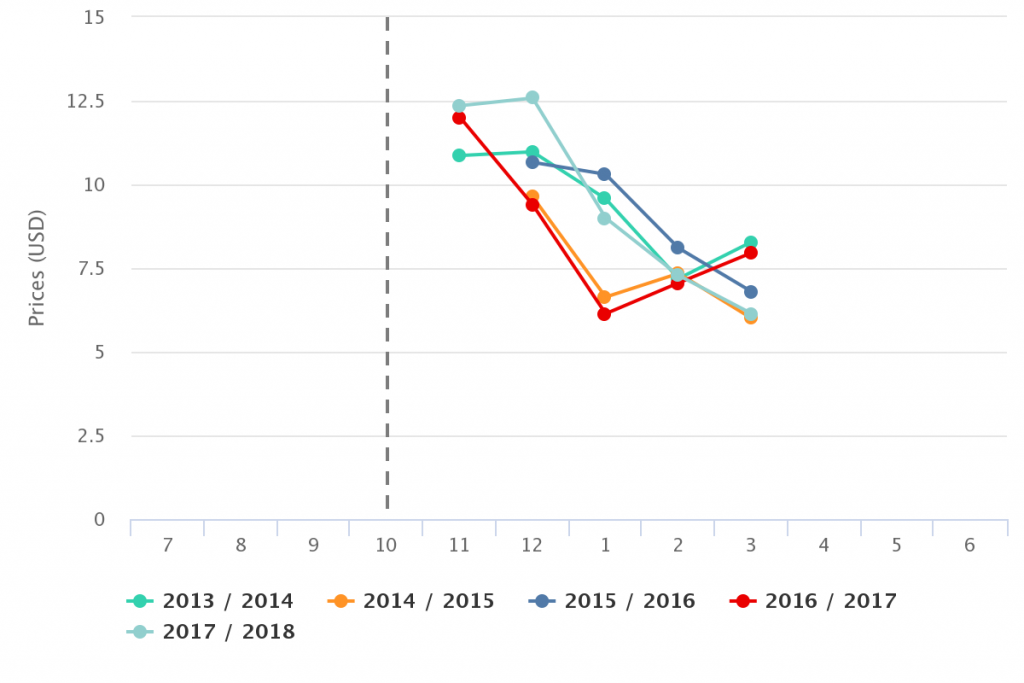 With the first shipments already arriving in the U.S. market, it will be very interesting to see how this season plays out. The first prices that the USDA is reporting are already unusually high; looking back they are actually the highest we have seen since 2010, where our datasets begin. There is also a notable difference between the prices for Chilean fruit and what we are seeing for Peru and Mexico, which typically aren't so marked. In the last two years, Chile’s fruit often has taken a premium over Peru and Mexico, but nowhere near the US$6 per kilo that we are saw last week. The best explanation for this variance can typically be found in the quality of the fruit. Unfortunately, the USDA does not report on that parameter, so our only proxy is the origin, which at the very least lets us know of which point of the season the fruit is in. 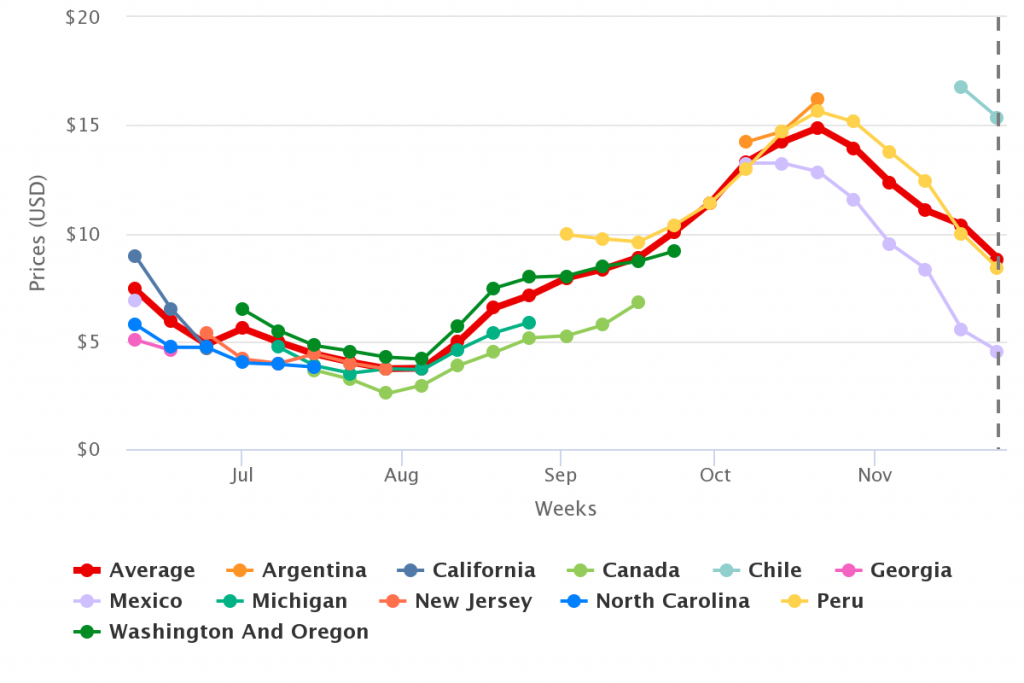 With the Chilean Blueberry Committee forecasting a slight drop in production compared to last year, and prices already very high, I would expect a season of generous prices for Chile, at least over the next couple of weeks. The distribution of their production has a lot to do with this. As of yet, I haven't seen very much consensus on the full effects of the hailstorm, also mentioned in the referenced article. If Chile's production volumes see themselves very much more diminished, we might have very high prices indeed going forward.

To welcome Blueberry professionals to the service we want to offer a 10% discount off your first month or year with the following coupon code: BLUEBERRIES

The code will only be good till the 11th of December 2018, so visit us today.