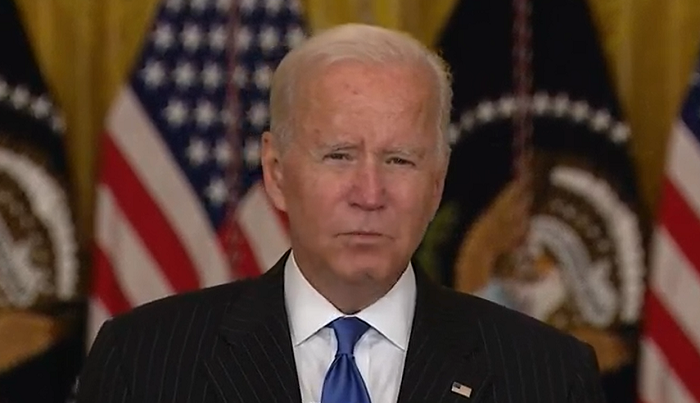 U.S. President Joe Biden has told companies to "step up" to ease the severe supply chain bottlenecks ahead of the holiday season, warning that he will "call them out" if they don't do enough.

“I know you’re hearing a lot about something called supply chains and how hard it is to get a range of things from a toaster to sneakers to bicycles to bedroom furniture,” Biden acknowledged in a short address at the White House on Wednesday. “With the holidays coming up, you might be wondering if the gifts you plan to buy will arrive on time.”

Biden announced that the Port of Los Angeles – which has recently suffered a record backlog – will expand to 24/7 operations, following the example of the Port of Long Beach, also in California.

About 40% of shipping containers imported to the US come through the two ports, which are among the world’s busiest but typically operate five days a week, closing at night and weekends. The change will see the Port of Los Angeles add more than 60 hours of operation a week, almost double its total earlier this year.

Biden, who set up a supply chain disruption task force in June, said the announcement has the “potential to be a game-changer” but added: “I say potential because all of these goods won’t move by themselves.

“For the positive impact to be felt all across the country and by all of you at home, we need major retailers who ordered the goods and the freight movers who take the goods from the ships to factories and to stores to step up as well.”

In a positive sign, Biden said, three major carriers of goods – Walmart, FedEx and UPS – plan to intensify their round-the-clock operations to speed the shipment of goods across the country. Target, Home Depot and Samsung are also increasing their work in off-peak hours.

The White House expects the pledges from the six companies will amount to 3,500 additional containers moving each week through the end of the year.

“This is not called a supply chain for nothing,” Biden said. “If federal support is needed, I will direct all appropriate action. Now, if the private sector doesn’t step up, we’re going to call them out and ask them to act because our goal is not only to get through this immediate bottleneck but to address the longstanding weaknesses in our transportation supply chain that this pandemic has exposed.”