The future of methyl bromide - FreshFruitPortal.com

Methyl bromide has been an effective tool in controlling pests, but one with a significant downside due to its role in depletion of the southern hemisphere’s ozone layer. For the global horticultural trade, such as imported Chilean fruit into the U.S., it remains the essential tool to combating pests.

That could soon change, however, thanks to trials being conducted under the supervision of the USDA’s Agricultural Research Service in partnership with Draslovka Services, Western Fumigation and Holt Logistics.

The Montreal Protocol and the fall of methyl bromide

With the globalization of the food supply chain, there is an increased demand for processes that guarantee food security and safety. Some of the most common tools use chemical-based approaches, which guarantee the needed security and safety, said Spencer Walse, a Research Chemist and postharvest treatment expert for USDA ARS.

At the same time there are very strict regulations, not only on what chemicals can be used, but how much and in what context.

The Montreal Protocol, finalized in 1987, is a global agreement to protect the stratospheric ozone layer by phasing out the production and consumption of ozone-depleting substances (ODS). While most of the methyl bromide in the stratosphere comes from natural sources, man-made use was identified for regulation.

As part of the protocol, its use would be phased out in stages through 2005, although the protocol has a provision for two cases of exceptions where the sector or region does not have a technically or economically viable alternative to methyl bromide, making its replacement more difficult. One is a “critical use” which are a reviewed and approved on an annual basis.

The other is a permanent exception for “Quarantine and Pre-shipment” (QPS) uses of methyl bromide, whereby applications are requested by the importer as a condition of entry, such as before a country exports the traded goods or upon their arrival at destination.

“Every country has their own opinions, so I call it the agricultural conundrum, we’ve got to use these chemicals, including methyl bromide, to guarantee security, but consumers and regulators don’t want us to”, Walse said.

In a consumer driven market where policy and regulation is being shaped by the demands and needs of the end consumer, “the trend over the years is heading to softer and softer chemistries being applied on food, or no chemicals at all,” he added.

In this context, methyl bromide is “an incredibly valuable tool” which he imagines will remain in place for years to come. But this is trending towards mission critical situations, and for routine type fumigations, like that of table grapes coming in from Chile, he believes that “there is tremendous pressure to eliminate all but the most critical methyl bromide uses” and I think an argument can be made that effective enough alternatives exist for this particular instance.”

The search for an alternative

Considering this trend, there is a clear need to evaluate alternatives, and this has been a long time coming, dating back to the creation of the Montreal Protocol.

Among the frontrunners being developed to replace methyl bromide for QPS applications is a chemical product named Efume™, which is manufactured by Czech fumigation experts Draslovka Services, and was developed over 20 years ago.

According to the company, Efume stands apart from other alternatives as a safe, non-residual way to protect postharvest produce, packaged and stored foods and processing equipment. The active ingredient is ethyl formate – a naturally occurring substance, which decomposes into benign constituents, with zero ozone depleting potential.

Part of the challenge in creating an alternative is that it needs to be legally registered in the destination market, in this case the U.S., which is a long, extended and costly process of trials and approvals from multiple U.S. government agencies. 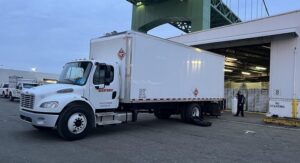 Efume trial in the Gloucester Marine Terminal in New Jersey

In the case of Efume, trials in April 2022 are the most advanced stage thus far for ethyl formate fumigation of Chilean table grapes imported into the US, bringing its application to a real-world scenario through a trial in the Gloucester Marine Terminal in New Jersey. The trials come through an agreement between the product manufacturer and Western Fumigation to bring the treatment to the U.S. market, in partnership with the USDA and Holt Logistics.

For USDA-ARS’s Walse, ethyl formate is a very attractive alternative possibility for this import scenario, as it “fits into the methyl bromide-derived logistical and operational frameworks already in place at U.S. port facilities Also, from a human and environmental health perspective, it will be very, very difficult to find a softer fumigant with as much fast-acting control”.

There are still some internal feeding fruit fly larvae that it does not control, but in the instance of fumigation, it is targeting external pests, and the compound has proven effective in doing so, while at the same time not leaving any toxic residue, nor creating any atmospheric releases that would affect the environment.

“Ingestion residue-food tolerance/maximum residue level- issues are minimal compared to most other postharvest fumigants, plus exposure to workers and bystanders will be essentially negligible so yes, I think it checks a lot of boxes. It's very consumer and regulatory friendly,” Walse added. 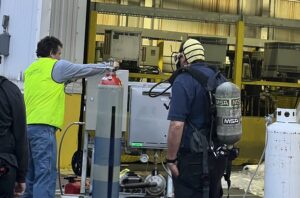 From a business perspective, it can also be applied quickly to fruit in the quarantine process, thus reducing the processing time, getting imported fruit to market quicker and avoiding fees from the logistics process.

“Some other proposed alternatives just take way too long,” he said, adding “you can't be taking days for treatments at port facilities. You’ve got to obtain insect control quickly and on fresh fruit, ethyl formate acts arguably quicker than methyl bromide,” Walse concluded.

The process to get to this point has taken years, even decades. The registrant (Draslovka Services represented by Western Fumigation in the U.S.) has continued its initiative as it embraces USEPA, USDA-APHIS, and state counterparts throughout the regulatory process required to get the substance closer to FIFRA and phytosanitary approval, critical steps along the path to successful commercialization.

According to Shannon Sked, Western Fumigation’s Director, this real-world trial is a critical step in seeing this advancement, since it is the first real world test for the product in the U.S. The close working relationship with USDA-ARS uses their knowledge to reach past a lab scenario to gauge its true effectiveness.

“Because what we do know already is that for surface feeding insects, this product is highly efficacious”, he said.

But for Sked, one of the biggest points is that it is not as hazardous for workers either and that “it has a twenty-fold improvement on OSHA safety, worker safety,” compared to methyl bromide.

Together, this paints a picture where “not creating a risk to our domestic farmers and for nutritious food imports is incredibly important. And so that's where it gets really exciting, it gives us an opportunity,” he added.

The process will continue to register the substance with the EPA. This will be followed by getting a process approved for the use case, which will fall under the USDA Animal Plant Health Inspection Service (APHIS). By doing a joint trial, the data can be used for the varying agencies needed to approve its final use.

A large trial could be necessary and will be determined in the near future, if APHIS requires it to approve the process based on the results from the April trial. Sked sees a chance that it could be ready by the upcoming Chilean grape season (2022-23), and if not, it could come into play the following season.