USApple joins the call for damaging tariffs to be scrapped - FreshFruitPortal.com

The U.S. Apple Association (USApple) joined more than 40 agriculture and food groups to call for the elimination or reduction of U.S. tariffs being imposed on other countries, arguing that retaliatory tariffs are harming U.S. agriculture.

According to a statement, the groups highlighted higher fuel, machinery and input costs as the cause of the U.S. agriculture community’s suffering, in a letter addressed to U.S. Trade Representative Katherine Tai.

These problems have come as a result of the pandemic, supply chain disruptions, inflation and war in Ukraine, compounded by decreased market access.

“The apple industry continues to grapple with the consequences of a trade war in which we were innocent bystanders”, said USApple President and CEO Jim Bair.

“Compound the past four years of lost market access with skyrocketing input and labor costs, all while apple prices are relatively stable unlike the daily stories of food price inflation and it has suddenly become a perfect storm for apple growers”, he described.

Furthermore, prior to the introduction of retaliatory tariffs, both India and China had been promising growth markets for the U.S. apple industry. Now, “these two alone have cost growers hundreds of millions of dollars in lost sales, sales that are gone forever”, he added.

Before, U.S. exports accounted for about $1 billion worth of apples annually, roughly one-third of the country’s crop. In 2015, the U.S. gained full access to the Chinese market which ‘quickly rose to number six as an export destination’ and exports to India in the first nine months of 2017 more than doubled sales in 2016. 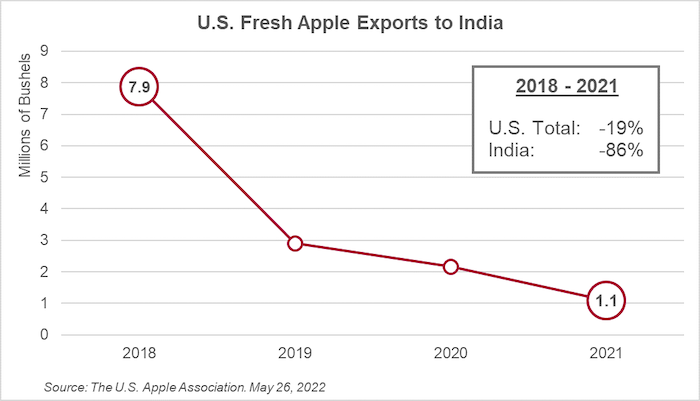 “The retaliatory tariffs in response to the U.S.’s tariffs have crushed apple growers’ export sales”, the USApple President emphasized.

“That's why we are calling on the administration to put an end to the tariffs that are hurting U.S. growers and apple businesses”, he concluded.