Chilean shippers were responsible for more than half of that uptick, and Peru more than tripled its volume to account for the bulk of the remainder, followed by Mexico which notched a solid doubling of volume but still only made up about 8% of the market.

So the Andean augmentation is at the heart of this drastic change in the market, but for Chile and Peru the causes are markedly different. And for the latter, it seems the spike is here to stay and can only get higher. 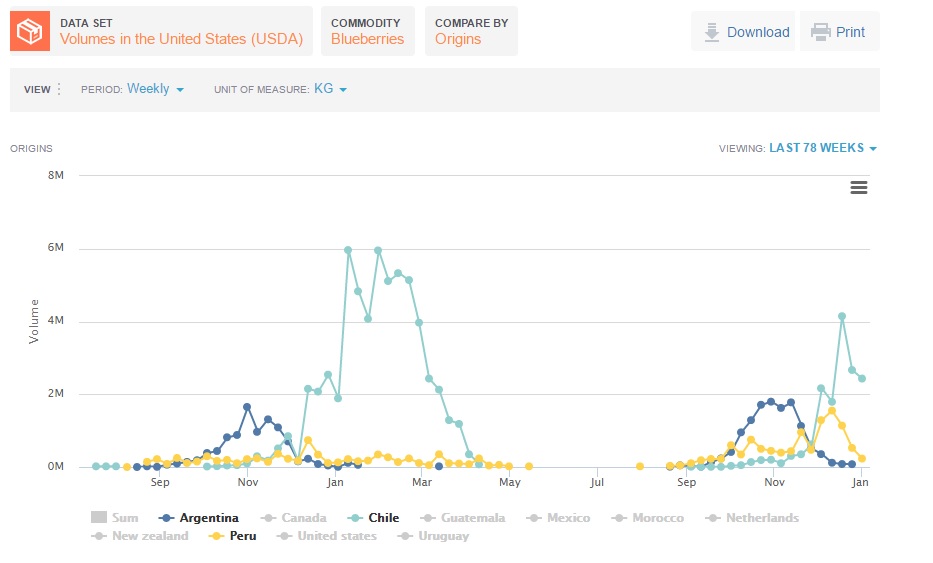 South American blueberry arrivals in the USA. Graph courtesy of the IBO and Agronometrics.

“If you consider that a market is like a person, it will always react abruptly to changes in the routine,” says Miguel Bentín, who heads up Peruvian blueberry industry organization Pro Arandanos.

“If the market is used to scarcity during those weeks, it’s possible that situations arise that are difficult to face, but the market is about perception. If it’s perceived there will be more volume, there will always be an impact on price.”

He adds the reception from importers and retailers has been positive, especially considering the season can run consistently from September through to the end of February, and perhaps later.

“In Peru it’s a long season and effectively flexible, and the large operations have managed to have harvests over a long period,” says Bentin.

One of these large operations is from Peru’s largest agro-industrial group Camposol Trading, whose CEO Jose Antonio Gomez estimates his company’s U.S. office alone imported 7,000MT between August and December.

“I’d say we’re very calm. We don’t have a volume pressure. Yes, the market has deteriorated, above all from a significant concentration of Chilean volume, but we already had our harvest volumes programmed through promotions with supermarkets,” he says.

“A lot of supermarkets asked us for promotions in the two weeks leading up to Christmas, starting on Dec. 8 until around Dec. 22-23.

“We haven’t had the need to go to the spot market to desperately sell fruit.”

Camposol is edging very close to completing its plans to grow blueberries over 2,000 hectares of land, which Gomez says will eventually equate to a “considerable production” of 26,000MT.

To put that number in perspective, that’s the total Peruvian blueberry volume estimated by Bentín for the season to date, which will likely be bolstered by a further 5,000-6,000MT by February’s end. 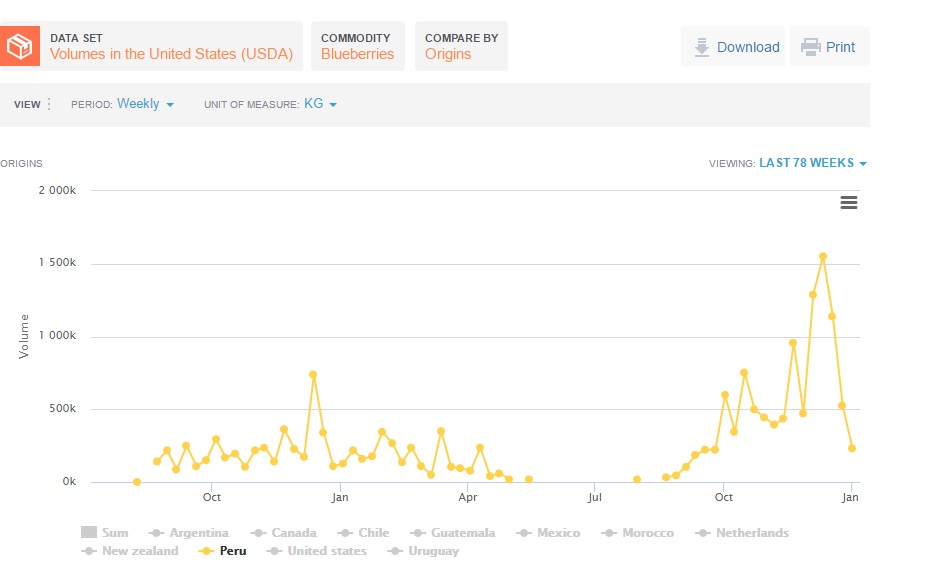 Peruvian blueberry arrivals in the USA. Graph courtesy of the IBO and Agronometrics.

The human effect of blueberry growth

In Camposol’s favor, and to some extent the communities in which it operates, this blueberry growth softens the blow of job losses from its asparagus business exit.  In late 2015 when the group still had its fresh and preserved asparagus unit, around 13,000 people were employed in the segment.

“However, many of these people have stayed to work in the blueberry project. Now we have more or less a population of 14,000-15,000 people, and we haven’t had to make a strong recruiting effort because a lot came from the asparagus business we already had.”

Gomez expects Camposol will be able to supply the U.S. market until March or April, depending on early season domestic U.S. supplies from Florida and Georgia.

The organization highlights 15% of the supply comes from small growers with around 1-10 hectares per farm.

For Peru’s southern neighbor Chile, the reason for the volume surge is more climatic than structural.

“More than volume, it’s a concentration due to a high accumulation of day temperatures which brought the harvest forward,” says Lucia Corbetto of SB Berries.

“This heating up has meant the season is running 10 days earlier,” she says.

Chilean Blueberry Committee executive director Andrés Armstrong describes as “complicated” the situation of more Chilean fruit in certain weeks, combined with larger volumes from other countries that have “arrived to stay”.

“Ideally you don’t have very marked peaks in some weeks and hopefully have a more uniform supply during the season,” he says.

“There is a lot of speculation, but it is a fact that we’ll have less fruit from late January compared to previous seasons. The weather in the last part of the season will be a determining factor for knowing how we’ll finish the season,” he says, adding the start of Mexican and Moroccan seasons will also play a part.

“If we take the numbers until today, there will be 20% less fruit in the rest of the campaign compared to last year.”

For Corbetto, she emphasizes the cold weather in southern Chile could help “extend the season curve a bit” but by no means will mitigate the impacts of hot weather in the campaign lead-up.

“In the last week of last year and the first week of this year, rains have reduced pressure on volume,” she mentions.

“And we can add to that there was a public holiday (Jan. 2) so there were fewer days of harvesting.”

Her company also started its first season of Peruvian blueberry production this campaign.

“We still have just a small volume. It’s gone very well and it’s a country that has a lot of promise,” Corbetto says.

“I think Peru continues to be more of a complement than a competitor in terms of exports, through programs that include both Peru and Chile.”