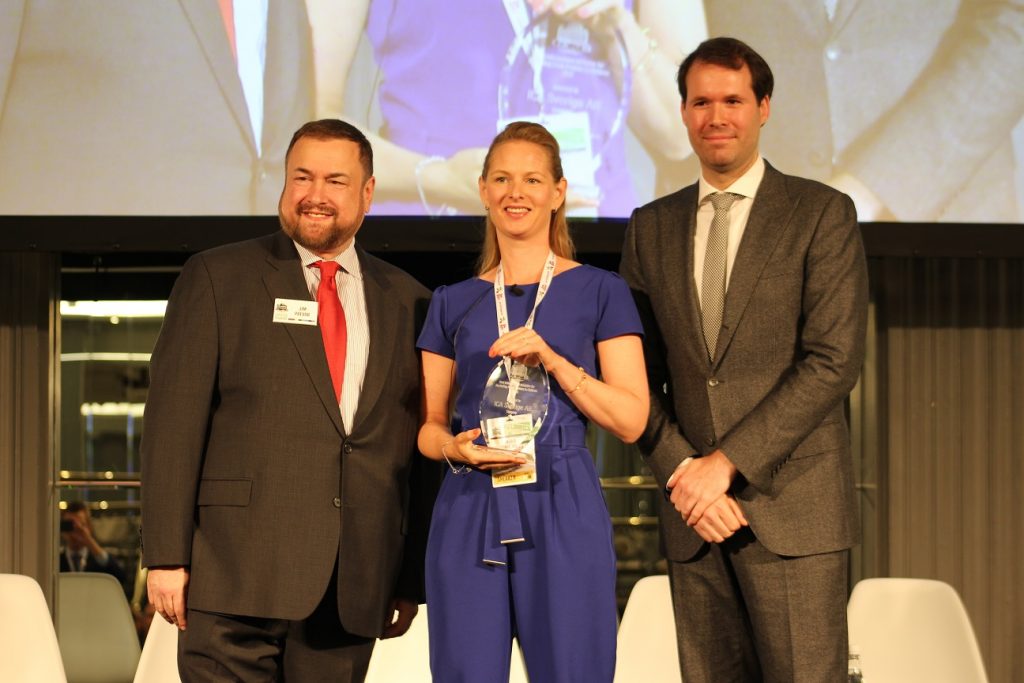 The award was presented to ICA's senior category manager Maria Wieloch by event organizer Jim Prevor of Phoenix Media and Produce Business Magazine and Tim Heddema of the Embassy of the Kingdom of the Netherlands in London, which sponsored the award.

The company was recognized for its initiative last year over the Halloween period, during which it launched a line of monster-themed fruit and vegetables.

The imaginative initiative was designed to provide fun and healthy alternatives to the candy typically consumed by children over Halloween, Wieloch said.

The campaign was highly successful and garnered widespread attention in both domestic and international media, with a notable increase in produce sales seen during the period.

In an interview after receiving the award, Wieloch said children in Sweden eat far fewer portions of fruit and vegetables than recommended, and ICA had seen Halloween as a good opportunity to increase consumption in a fun way.

"We contacted our private label team and gave them the idea, and they were very thrilled. This for them was I think one of the most exciting things they've ever done," she said.

She said there had been a high level of commitment and enthusiasm for the campaign at ICA's independently-run stores, helping to notch an 8% year-on-year increase in total produce sales over the period.

Wieloch explained that kids needed to be targeted to eat fruits and vegetables at a very young age as their palates develop quickly, which often makes it frustrating and difficult for parents to get them to eat healthily later on.

"If you make the packaging appealing to the kids...first of all it makes the shopping easier for the parents, but it also makes the kids want to go and touch and feel and maybe try something," she said.

She said big campaigns like this that run for a limited time "set the scene" and emphasize to parents the importance of encouraging their kids to eat fruits and vegetables, but she added that going forward as an industry everyone would need to think about how they can develop kid-focused produce.

"Berries are one of those things that are exploding, and you just have to look at the berry to understand why - it's convenient, it's tasty, it's small, it's easy and it's Instagram-friendly, which is not to be laughed at because then it gets exposure and more and more people see it," she said.

This week ICA held a brainstorming workshop for next Halloween, and is this year aiming to boost its range of fruit and vegetables included in the campaign.

The London Produce Show's International Award for Marketing Fresh Produce to Children this year had two runners-up due to the high quality of the entrees.

These two companies were Netherlands-based HillFresh International for its Nickelodeon branded snacking fruit campaign and U.K.-based The Fruit and Veg Kids for its awareness campaign.

HillFresh International's initiative saw children receive a gift directly with a 120g-box of fruit or vegetables, emulating the success seen by multinationals like McDonald's.

When the kids finish eating they also find a collectable card at the bottom of the box. There are 32 cards in total, and HillFresh said the aim was that other kids in the classroom would ask their parents to give them the same healthy snack to take to school.

Meanwhile, The Fruit and Veg Kids Awareness Campaign has the strapline “Education through Entertainment - with Laughter not Lecture”, and was intended to encourage children into a healthy and active lifestyle through the benefits of fresh fruit and vegetables, and to further educate them about the vital need for daily consumption of fresh produce.

The messages are conveyed via numerous books, songs and illustrations, as well as online, where a video can be seen of their song "The Banana Shuffle."