The U.S.'s largest apple-growing state has finally got its first exclusive apple variety, which is launching nationwide this season amid sky-high hopes for the future and an unprecedented level of collaboration within the industry.

The launch of Cosmic Crisp is not only unprecedented because it is the culmination of Washington state industry players coming together for the first time to make a collective success of a variety, but also because of the impressive volumes that will be available in the initial years.

Around 450,000 boxes are expected to be sold to major retailers during this inaugural season, according to Kathryn Grandy, director of marketing and operations at Proprietary Variety Management (PVM), which is managing the brand.

To put those numbers in context, that would mean that in its third year, Cosmic Crisp would be in more plentiful supply than domestically grown apples marketed under Pink Lady America. And before long, it could overtake Honeycrisp, one of its genetic parents - the other being Enterprise - which has proved an enormous success in the U.S. market over recent years.

A red apple with striking starburst-like lenticels, Cosmic Crisp is the result of a cross made by Dr. Bruce Barrett of the Washington State University (WSU) a little more than two decades ago, Grandy explained.

Extensive research and testing have been conducted on several generations of trees over that time, with WSU pome fruit breeder Kate Evans taking over the important work when Barrett retired a few years ago.

This research has come amid a yearning from the Washington state - which produces around 70% of the country's apples - to have an exclusive apple variety, just as New York apple growers have SnapDragon and RubyFrost and Michigan growers have EverCrisp.

"This is the first project of its kind, and it's really unique," said Grandy. "It's the first collaboration of an industry being grown at this volume and with this quality of a single cultivar."

Around 12 million trees have already been planted in the state - an unheard-of number before commercial launch.

Furthermore, all Cosmic Crisp apples will be shipped with the same packaging and under the same brand - a decision made by the brand's marketing advisory committee.

"That level of collaboration and support by WSU, our growers, and every apple organization in the state for a single proprietary brand is really unprecedented," Grandy said.

Washington apple growers - who have been able to apply to purchase trees since 2014 - pay royalties just as they would for other proprietary apple varieties, but the majority of those payments go back into the WSU's pome breeding program.

The university has also educated producers on good growing practices to ensure high quality and consistency across the board.

Since PVM was selected by WSU to manage the cultivar a few years ago, it has sublicensed around ten other nurseries to propagate Cosmic Crisp through the Northwest Nursery Improvement Institute (NNII).

It has also helped to develop an online database that includes information of every grower, packhouse, and sales company licensed to be involved with the apple, along with GPS coordinates of all the planted trees.

"So many growers want to buy Cosmic Crisp, and we're selling many trees," she said.

"Basically, all the stars have aligned with this industry. And that excitement is just amazing. Every day we get at least one inquiry from someone asking, 'where can I buy it?'"

PVM, which is focused on building the brand and making sure that consumers know about the apple before they walk into stores, has a marketing budget of US$10.5m - an important aspect when entering into the modern-day apple market.

"There are about 36 branded apples in the country and over 100 varieties and brands in the country, so right now, it's a crowded field," Grandy said.

"It's therefore an absolute given that the product we deliver needs to live up to the brand promise. It needs to taste great, store well, be juicy and crunchy and everything we say it is.”

But aside from the apple's characteristics, the large initial volumes are a significant differentiator that makes it stand out from the crowd in the U.S. market. 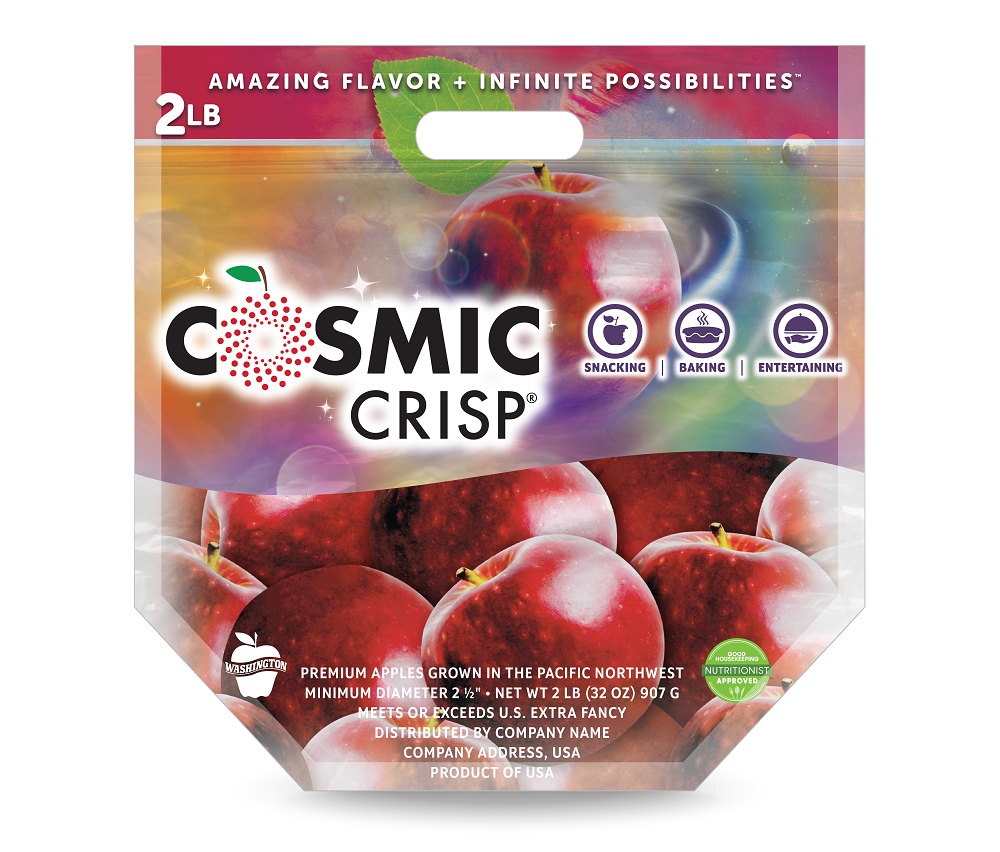 The U.S., however, is not the only country where Cosmic Crisp will be grown. It has been trademarked in numerous countries around the world and has been licensed to partner growers, most recently in Australia.

"The important thing to note about the international business is that Washington state has the majority of trees and volume globally and can export worldwide," Grandy said.

"Currently, Washington state does have limitations in areas of the world that are very difficult or impossible for us to export into, which exists for any apple - Australia's a great example."

The global licensing deals will be evaluated in the years to come, she said, to see what the demand is and if it's being filled.

The PVM team was recently at Asia Fruit Logistica, where Grandy said there was a high interest in Cosmic Crisp. Washington growers will also be providing samples to attendees at the upcoming PMA Fresh Summit, which is the official launch of the apple.

For now, the Washington apple industry is busy with the initial commercial roll-out of Cosmic Crisp, which is harvested in the late-September and early-October window. Coincidently, that is a similar timing to Red Delicious, which recently lost its crown to Gala as the more widely grown apple in the U.S.

With the excitement that has already been built around Cosmic Crisp, combined with its sharp growth projections and unprecedented industry collaboration, the apple looks set for a stellar future.