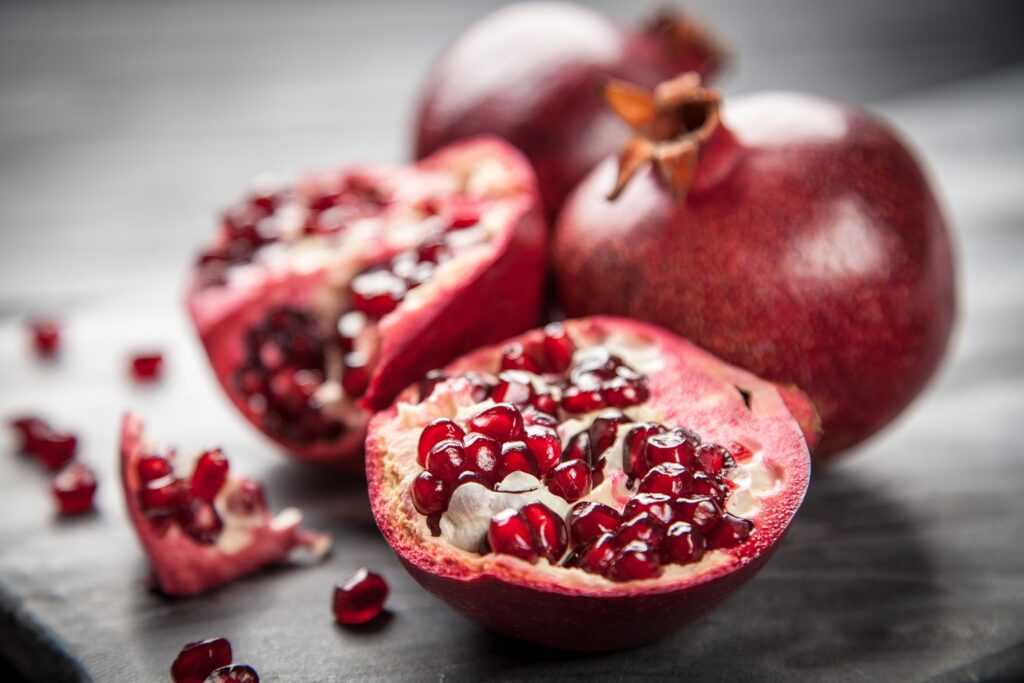 Pomegranates are turning heads in the UK. At a time when many prepared fruits have been challenged severely by the pandemic, sales of pomegranate seeds have experienced year-on-year double-digit growth. As such, the prepared pomegranate market is estimated to be worth around £30 million, with ample headroom for growth.

To discover the opportunities, PBUK speaks exclusively with PrepWorld, a specialist prepared fruit supplier to UK retailers, and the biggest supplier of prepared pomegranate packs. This spring, PrepWorld has launched a campaign called Poppin’ Poms to drive consumer awareness and retail sales.

In the UK today, most pomegranates are bought as seeds in a prepared pot, rather than the whole fruit, thanks to their ease of use and snackability.

“It’s a fast-growing category on virtually every front,” explains Ben Olins, CEO at PrepWorld. “Pomegranate seeds weren’t really affected by the Covid-19 pandemic like other prepared fruits. In fact, it was a growth area.”

Overall, Olins says pomegranate seeds are a great “in-home product” thanks to being “convenient, incredibly tasty and very versatile”. “With more people being at home in the last year they have been buying packs of prepared fruit and salads, so sales [of pomegranate seeds] have grown,” he comments.

Using information from IRI and Kantar, PrepWorld estimates that the UK retail market for pomegranate seeds is worth roughly £30 million. Growth has been led by larger pack formats as a result of increased in-home consumption occasions driven by the pandemic. Typical single-serve packs weigh 80 grams (g) or 100g, while the larger multiple-portion packs weigh 200g, 250g or 350g. The product is available at all the main UK retailers.

UK consumers are using pomegranate seeds as not only a snack but also an ingredient in various meal occasions. PrepWorld says breakfast remains key but lunch and dinner also play a growing role in this trend.

“We believe that sales of prepared pomegranate seeds have overtaken whole-head pomegranates in the last couple of years as consumers’ knowledge of the fruit grows; resulting in usage across more meal occasions and recipes, whilst the need for convenience is absolutely fundamental,” reveals Andrew Crawford, Senior Category, NPD & Marketing Manager at PrepWorld.

Even so, UK household penetration remains low – standing at just 7 per cent, according to Kantar. As such, PrepWorld had a lightbulb moment, and launched its Poppin’ Poms consumer campaign in partnership with its pomegranate grower base.

The campaign is following a multi-channel, digital approach, supported by traditional online and in-print media. The drive combines grower involvement, advertising, publicity, social media and direct work with PrepWorld’s retail partners, including Ocado and others.

Set to run annually, Poppin’ Poms will shine a light on the health benefits of pomegranate seeds, the fruit’s versatility and its year-round availability in UK retail stores. The objective is to increase awareness, to introduce more consumers to pomegranate seeds, and for shoppers to buy the fruit more frequently.

Most importantly, Poppin’ Poms wants people to try and use pomegranate seeds in new and different ways by increasing the eating opportunities through tempting pomegranate seed recipes.

“We believe there is great headroom for growth for this delicious, nutritious fruit that has so many different usage applications,” notes Crawford. “However, more can be done within the industry to drive awareness and understanding across a broader customer base, which is the principle aim of the campaign.”

Before Poppin’ Poms, PrepWorld felt there was a gap on the market for advocating pomegranates.

“No one has been marketing pomegranates to consumers, not in this way at least,” Olins points out. “No one has been taking an Instagram approach; using imagery to present the product in its best light. We want to showcase this fantastic fruit with its many health benefits. We’ve put a lot of thought into the new website design, and how we should talk about the fruit.”

PrepWorld aims to build a ‘foodie’ community through not only the website poppinpoms.com but also the Instagram channel @poppinpoms. Ultimately, PrepWorld would like Poppin’ Poms to become an industry-wide campaign.

“We want to have conversations with others in the pomegranate trade because we’re all in the same boat,” Olins explains. “I’d rather make the pie bigger and share that pie because then the industry benefits, and the consumer benefits. There are other things that potentially we’d like to do in the future with a bigger grower base from a varietal perspective too.”

To drive consumer awareness and engagement, PrepWorld is working with some of its retail partners on digital activity that centres around recipe inspiration and nutritional information.

Currently, retail activities are in play with Ocado, including a coupon promotion targeting current non-users of pomegranate seeds. The goal is to encourage shoppers to trial the product, supported by advertising banners online which provide recipe inspiration.

This will be complemented by a Poppin’ Poms blog that will sit on the Ocado blog site. There, consumers will be able to access a range of pomegranate seed recipe ideas, as well as nutritional and health information.

The aim is to run a similar style activity with Tesco in September, and with Waitrose in November, according to Crawford.

Digitally, the focus of the Poppin’ Poms campaign is on sharing recipes that highlight the flexibility of prepared pomegranate seeds across all meal occasions and snacking opportunities. The jewel-like seeds can liven up sweet and savoury dishes, from porridge to salads and desserts, or drinks.

PrepWorld has developed a number of recipes, including: Pomegranate and Chia Pudding, Roast Butternut Squash and Pomegranate with Pistachio Pesto, and Pomegranate Salsa, Guacamole and Goats Cheese Sourdough Slices.

Throughout the year the initiative will express different messages with a seasonal focus. During spring and summer, the emphasis is on ways to use pomegranates for healthy eating. For October and November, the focus will shift to party food, such as how to use pomegranates in Prosecco or Christmas Dinner.

In addition, PrepWorld has undertaken a full nutritional analysis to highlight the health benefits of pomegranate seeds. For example, a 100g portion of pomegranate seeds provides half of the recommended daily amount of Vitamin C, and contains only 89 calories. Also, the seeds have beneficial effects on blood circulation, may have potential anti-inflammatory properties and may help age-related memory loss.

All of the marketing content (the recipes, health messaging, product information etc.) is available for the retailers to use, if they so wish. Content is being updated regularly on poppinpoms.com, and via social media.

Already, Olins says there has been coverage in different UK newspapers and consumer magazines, including: The i., BBC Good Food, Bella, Stylist, as well as via podcasts.

Next, Olins would like to evolve the campaign through product engagement opportunities at occasions such as food festivals. “Just handing out samples won’t get you the consumer engagement,” he stresses. “We want to do something meaningful where we can explain the product, and consumers can see prepared pomegranate seeds being used in a certain way.”

As well as the being the largest supplier in the UK, PrepWorld claims to be the only UK producer of prepared pomegranate seed packs.

“Other suppliers prepare the product in another country and airfreight the packs to the UK,” Olins comments. “Our model is different. We buy huge quantities of the best fruit available in season, and bring it to the UK where we’ve become specialised in holding and storing the fruit optimally until we need to make up the packs on the day for customer orders.”

Olins says PrepWorld’s product has all the benefits of being prepared on the day, rather than being packed overseas two-to-three days previously. “We have the freshness, the reduced carbon footprint, and we can access all sourcing markets,” he stresses.

PrepWorld sources pomegranates year-round; predominantly the ruby red Wonderful variety when in season, complemented by other varieties. The company works with around 10 different producing countries, including: Spain, Portugal, Turkey, Chile, and South Africa. Each pomegranate is carefully hand-picked, packed and prepared to ensure the best quality pomegranate seeds arrive from tree to table.

“One of the hardest things for us has been to develop a 52-week sourcing programme,” Olins reveals. “It has been a challenge but we’ve gotten to the point now where there are very few weak points in our supply. We know what a difference a really great pack makes; with that ruby red fruit and consistent quality. Now, we are sufficiently proud of the product that we have achieved that we feel ready to market it via a consumer campaign.”

Looking further ahead, PrepWorld is working with its growers to develop new pomegranate varieties that work for the grower, the packer and the consumer.

“For PrepWorld, any variety has to work from a preparation perspective,” adds Olins. “We want fantastic flavour, the right sugar and acid balance, and the ability to prepare the fruit on site, plus we need the yield,” he explains. “It’s tough to find all those characteristics in a variety but PrepWorld forms part of BerryWorld, which is really strong on varietal development.”