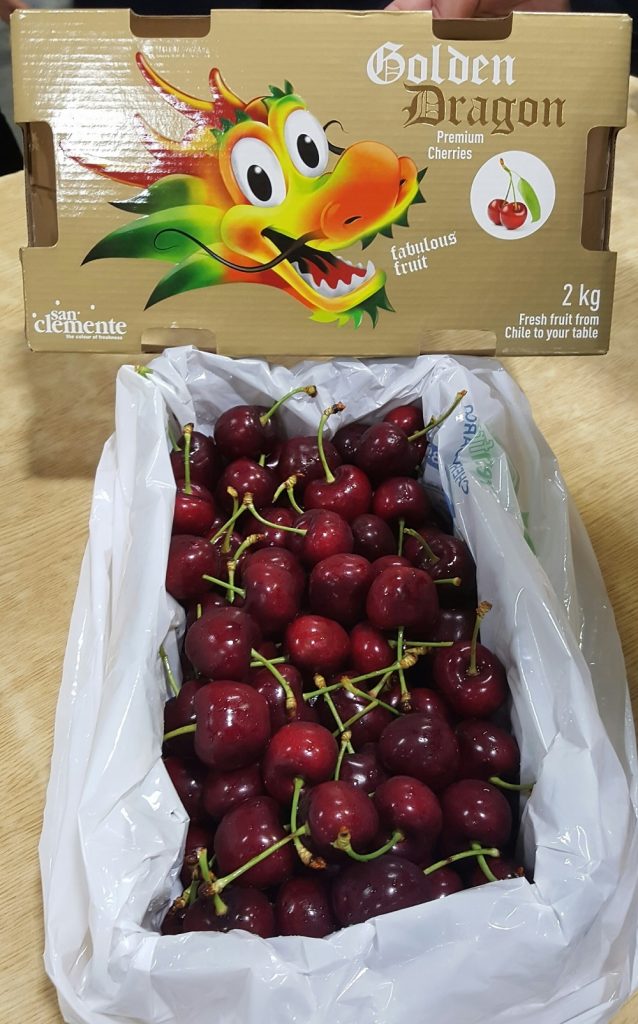 As Chilean cherry plantings signal a rise in volumes over the course of the coming years performance in the Chinese market will be key for growers, particularly around the make-or-break period in the lead-up to Chinese New Year.

In other words, right now.

Cerasus managing director Ramón Arrau says unusual rains meant the deal got off to a tricky start with the early varieties, while hot weather that followed led to fast ripening that has made the season earlier by close to two weeks.

Such an event could not have come at a better time though, because Chinese New Year will be much earlier this year on Jan. 28.

"Last season we had very little fruit compared to the previous, but we had very good quality fruit," Arrau tells Fresh Fruit Portal.

"This year the condition of the fruit of the first varieties was really affected by the rain, and the ones that came afterwards that didn’t have rain effects like parting or rot.

"Due to the fast accumulation of warm days, they ripened very quickly." 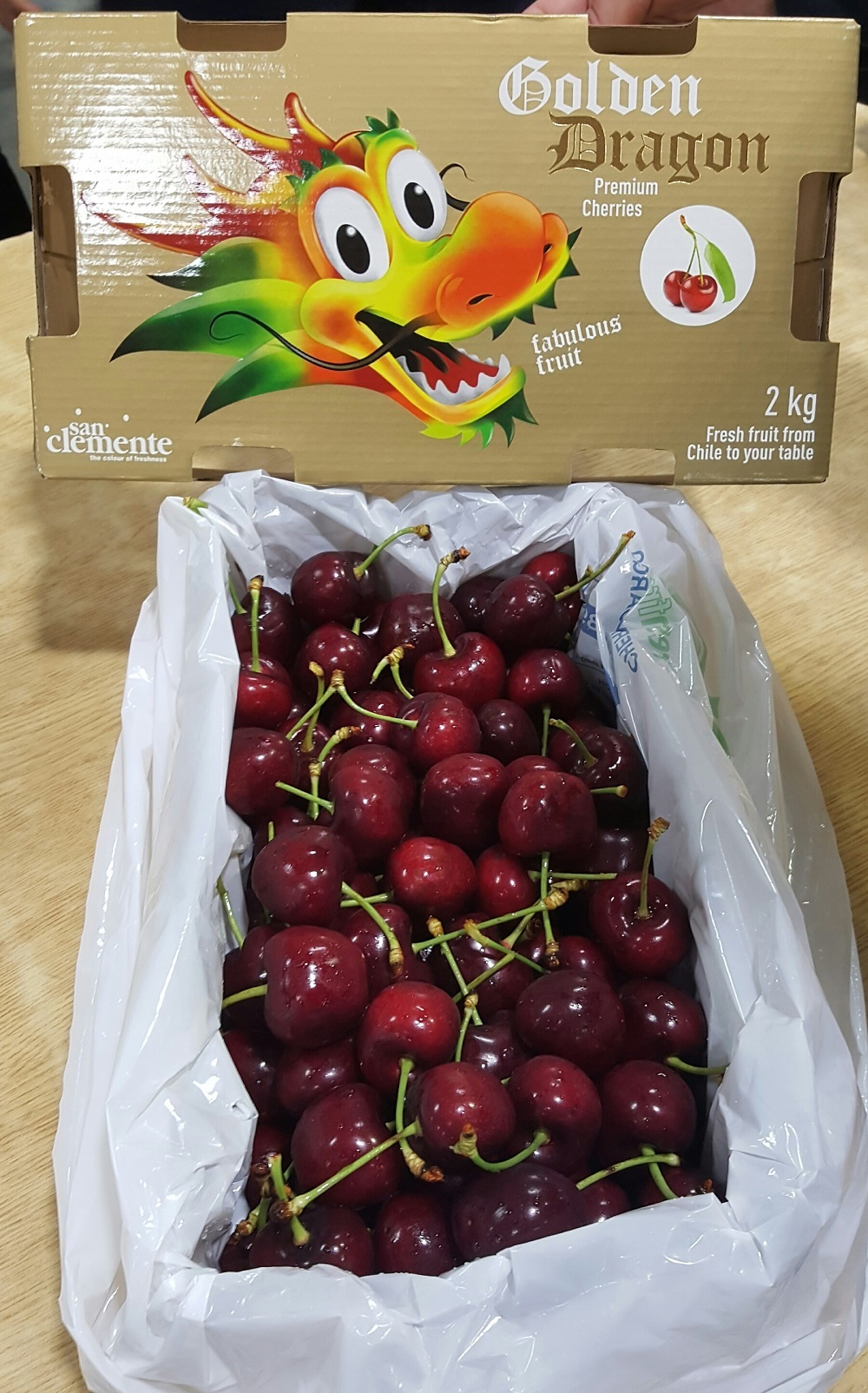 He adds frosts have played their part too, but production is still set to surpass the previous season.

"At one point we saw that we had significant damages from frosts as an industry, however there are a lot of hectares entering production. This meant that the final projection for the season was very different.

According to San Clemente commercial manager Sebastián Suazo, the weather conditions have pushed projected volumes down from 25 million boxes to 18.5 million boxes.

"While the total expected volume dropped, it continues to be more than what was shipped last season. The importers took stock of the situation and this led the market to be activated," Suazo says.

He adds 15.3 million boxes have already been shipped to date.

The season has also been sped up further by an initiative, spearheaded by the initiative of the the Chilean Fruit Exporters Association (ASOEX), to use more fast ships that can get the cherries to Hong Kong in 20 days and to Shanghai in 25.

"In previous years what happened is a lot of times cherry volumes that were sent by fast ships would overlap and arrive at the same time as what had been sent with slow ships - this generated a greater concentration of fruit," Suazo says.

"But this year, the industry could see earlier harvests were coming and started shipments with fast ships from the start, leading to a more ordered arrival of fruit and without a doubt this helped for a better commerialization at destination."

"[With] Earlier harvests and fast ships arriving with large volumes in these two weeks before Chinese New Year, the timing will be quite well matched," adds Alvaro Herreros, export manager at Agrícola Lo Garcés.

"So combined, demand has increased but arriving volumes have increased...still I think it's good. Movement is healthy and the sales price is healthy, combined with the quality and size of the varietes," he says.

"I think all the growers can expect good returns this year also – not any surprises, but don’t expect a higher price this week or next week. The price level is already there."

He says there has also been a good amount of "gambling activity" where a vendor might buy up a whole container without checking inside for quality, making a bet on the market.

Zhang adds there have been fewer Chilean shipments sent in two-for-one packs (2 x 2.5kg packs in a box).

"Why? Because it failed in the last season so they have less growers still wanting to use this box to send to China," he says. Unfortunately for those who opted out, these types of packs have been popular at the moment.

He says there have been a lot more air cargo shipments of cherries compared to previous campaigns.

"And there's a lot of competition, a lot of small, medium and large traders are starting to handle the air cargo cherries, and there are a lot of brands," he says.

Finding positives from a tough start

Suazo says an earlier season and more shipments via airfreight have helped smooth out supply for the campaign, even though "results were not as good as we had hoped".

"There were a lot of Chinese importers that bought charters for the fruit but as there was less volume in early varieties like Royal Down, they decided to send the fruit anyway despite the poor condition because the charters were already paid and they had to fill space," he says.

"So, there were two factors - poor quality of fruit and high volumes of this fruit in a period when demand is not so high."

He clarifies Royal Down's sizing was rather small, while Herreros adds that variety and Santina have not had a good season with fruit arriving softer than usual due to rain impacts.

"This has been a season that started off complicated, but now with the later varieties which were not affected by the unusually hot spring or the rains, we are seeing quality is much better," says Herreros.

"The first fast ship that arrived in China didn't have good sales prices...but when fruit that had arrived at the same time as airfreight shipments started to clean out, the market started to rebound," adds Suazo.

New programs in China and further afield in Asia, U.S.

Herreros comments how his company Agrícola Garces is working intensively this year on cherry promotion in China, under a project run by the Chilean Cherry Committee which is investing US$5 million in different promotion and marketing activities in the market.

"This is the biggest promotional campaign that has been done, with static advertising, in the subway in China and at points of sale, among others," he says.

"This weekend we'll go out with two pallets from Chile Chico. It's a very incipient project where we now have 20 hectares, but we are betting on it.

He highlights the importance of diversification of destinations for the future as well, given the Chilean cherry industry currently sends around 85% of the fruit to China.

"Our vision is while today we are concentrated on China, when Chile reached 30-35 million boxes the market will have a lot of oversupply, and we are moving toward other countries that show interest in consuming our fruits. In the season of Chinese New Year, we've seen that in Taiwan and Thailand most of all," Suazo says.

For Arrau and his team at Cerasus, diversification has also been key; not just in Asia, but in the Americas too and particularly its biggest importer.

"We think diversification of markets is vital – we can’t depend just on China, but it’s a risky game because you also can’t compromise the value of the net returns and competitiveness of growers, looking at markets that won’t be able to pay what china pays.

"So what we look for is diversify as much as possible without losing value, so we identify markets that can pay for a determined value of size, a similar price to what China pays.

"So we’re selling, although in small volumes, in Malaysia, Korea which opened this year, in Taiwan, Japan, England, Italy, Spain," he says, clarifying European markets have been "a bit complicated" due to economic challenges but they have the capacity for spot buying at competitive prices.

He also describes the United States as a "tremendously important market".

"It'll be very important in the future because it’s a country that consumes a lot and pays well for good quality products," he says.

"For many years the industry has been sending the United States what fell off the wave, because the best varieties and sizes are sent to China, and to Europe in its moment.

"And the United States which is close ends up with the smaller varieties or those that don’t travel as far. Obviously all this means that the U.S. will have a performance that is bad, but I think that will change.

"I think today you have to be open to the United States, to export good varieties and sizes, and generate private deals that will clearly be relevant when we’re producing 30 million boxes."