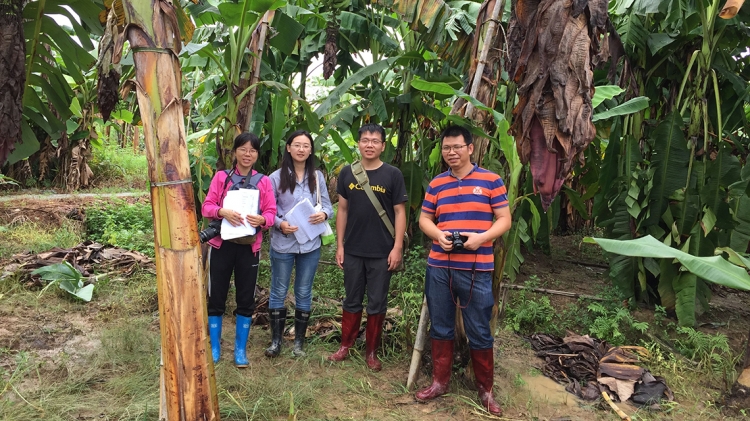 Chinese experts have recently released what they claim to be a new Cavendish-type variety of banana resistant to Fusarium wilt Tropical Race 4 (TR4).

The new variety was developed using chemical mutagenesis techniques and is now being multiplied and distributed to provinces around China.

The development comes as plantations worldwide are increasingly under threat from the TR4 fungus.

The International Atomic Energy Agency (IAEA), in cooperation with the UN's Food and Agriculture Organization (FAO), has worked with researchers from all around the world to support the development of new varieties of various banana species that would be resistant to the disease.

Therefore, the use of techniques such as irradiation or chemical mutagenesis to produce new varieties with favorable traits is often a favoured option to combat the disease.

Other countries, including the Philippines, are in advanced stages of developing their own varieties using gamma irradiation, Ingelbrecht said.

Yi Ganjun, vice president of the Guangdong Academy of Agricultural Sciences in Guangzhou, said the release of "a new Cavendish variety will benefit many farmers".

“This state-of-the-art technology has resulted in a remarkable breakthrough to combat Fusarium wilt," he said.

“The exciting results of a new ‘local’ banana variety resistant to Fusarium Wilt TR4 gives tremendous hope to banana farmers who have successfully tested the new plants in field trials.

“Mutagenesis techniques can contribute to the development of new banana plants to suit local environmental conditions.”

Chinese experts plan to support efforts in other countries to develop varieties resistant to TR4 that are suited for their climatic and soil conditions, Yi added.

These speed up the natural process of mutation in plants and creates genetic diversity that can then be used to produce new varieties, including those with favorable traits.

A coordinated research project with the participation of scientists from six countries, including China and the Philippines, has spearheaded work on developing banana lines with resistance to TR4 since 2015.

“The success achieved using chemical mutagenesis and the promising progress using irradiation in several Asian countries suggests that developing new, TR4-resistant varieties will be possible in the not too distant future in other parts of the world as well,” Ingelbrecht said.

Fusarium wilt has been a major constraint to banana production for over a century. The disease is caused by a soil-borne fungus called Fusarium oxysporum f. sp. cubense.

The pathogen remains viable for decades in the soil and is therefore difficult to eradicate. A new race of this fungus has recently emerged, called Tropical Race 4 or TR4.

“The fungi enter susceptible plants through the roots and interfere with the uptake of water, causing wilting of the leaves and the banana plant eventually dies,” explained Ingelbrecht.

Confined to Southeast Asia for decades, the Fusarium wilt Tropical Race 4 (TR4) was spotted for the first time in Africa recently and in Latin America earlier this year. Its outbreak in Colombia in August led to the declaration of a national emergency.