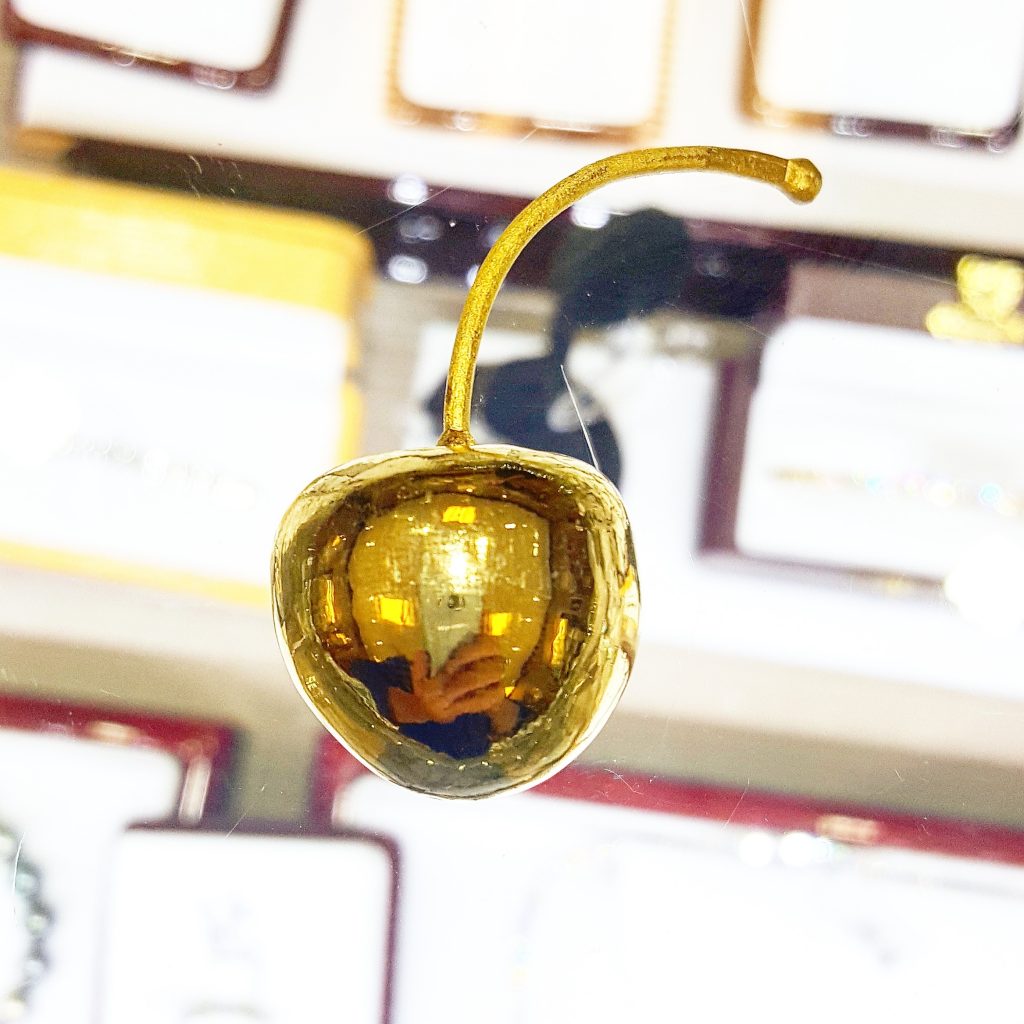 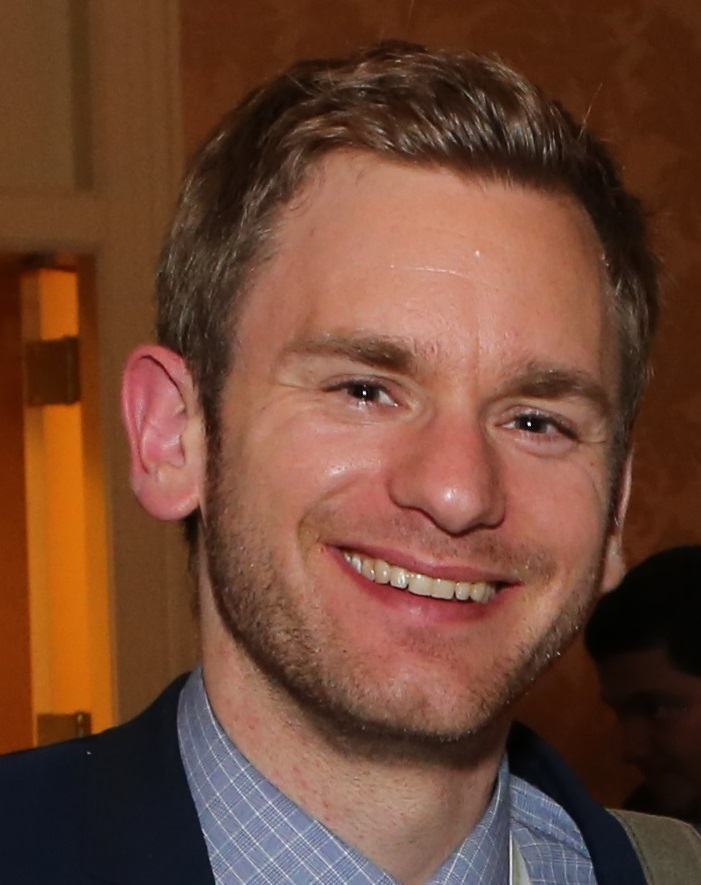 When gold cherries (made of actual gold) are sold in premium gift packs and it’s feasible to open a store themed around avocados, you know fruit is trending. Dear readers, I suggest you hold on to all those caps, bags and knick-knacks you’ve picked up at conferences and field visits - they could become valuable fashion statements.

As this eventful year comes to a close, we are faced with so many unanswered questions in the produce industry. Did Drake drive an increase in passionfruit sales? What does Kim Jong-Un think of organic, fairtrade vegetables? And is drinking turmeric lattes worth the health benefits?

But seriously, what a year this was! And for this microcosm of the web we were kept busy as the news kept flowing – acquisition after acquisition, joint ventures, weather events, market access deals, pest detections, fresh innovations, new varieties and retail shake-ups.

But amid all that it should come as a shock to no one that our most read story of the year included both avocados and Donald Trump.

It was titled Jalisco avocado delay in the U.S. has ‘nothing to do with Trump’ citing assurances from Mexican Agriculture Secretary José Calzada, but the country’s growers begged to differ, asserting it had everything to do with their country’s policy on U.S. potato imports.

There were concerns the protectionist rhetoric of the new U.S. administration might impact the produce trade, but in fact the nation opened its doors to a string of new products in 2017 - Ecuadorian dragon fruit, Colombian avocados, Argentine lemons (despite the fanfare no trade has materialized yet), Vietnamese mangoes and New Zealand persimmons. And statistics through to October show cross-border produce trade between the U.S. and Mexico actually increased in both directions.

The list further down covers the top issues of the year, but I’d like to take this opportunity to reflect on some of my own produce experiences from 2017, as well as some topics and developments that caught my attention.

There is nothing like the novelty of discovering a new fruit or vegetable. They don't always exactly make their mark on the tastebuds, but as produce industry professionals it is both enriching and educational to partake in the range that's out there. So before I go on, I'd like you to take a step back and consider the following: What were your "fruit firsts" in 2017? And what would you like to try in 2018? 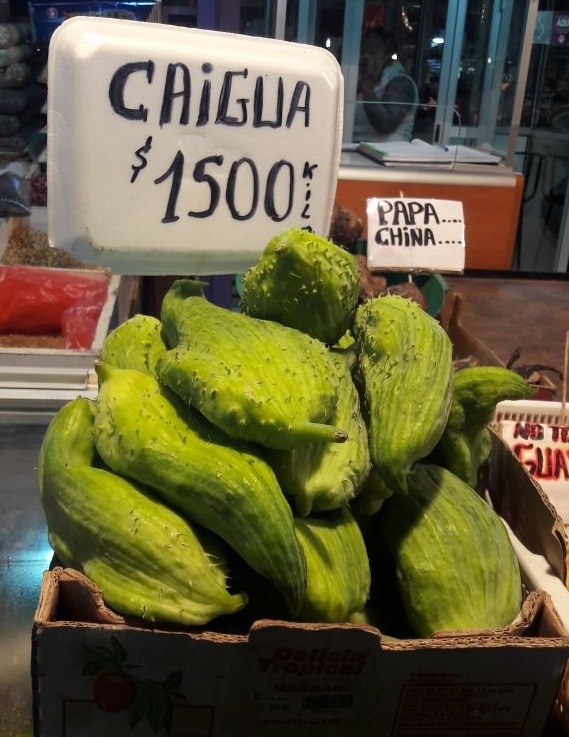 The Andean veggie Caigua was a first for me in 2017 along with a colorful array of other foods. Fear not - those are Chilean pesos, not dollars. Caiguas cost around US$2.40 a kilo.

The first such fruit for me this year was the 'copao', a Chilean cactus fruit I found at the La Vega wholesale market here in Santiago. I can't say it was as delicious as its cousin the yellow pitahaya which took the Produce Marketing Association (PMA) Fresh Summit by storm in October, but it was nonetheless refreshing on a hot summer's day. Its Latin name "Eulychnia acida" gives you some idea as to its flavor.

Another item I picked up more recently from the same market was the caigua, a green vegetable with a slightly furry exterior and bitter seeds inside. If you take those out you're left with a hollow interior and a flesh similar to that of a bell pepper, making it ideal for frying or roasting.

On a personal level I would highlight three standout fresh produce experiences this year: the Maluma Day in South Africa where I not only got to feel the palpable buzz around a new avocado variety but also witnessed groundbreaking trellising methods for the crop; the Paloquemao market in Bogota, Colombia where I tried sapote for the first time along with some old tropical favorites; and Buck's Farm in Australia, home to vast array of finger limes and other native crops like the Davidson's plum.

To be able to do all this, I can only feel blessed in what has been a fascinating 2017.

All this talk of discovery reminds me - it came to my attention recently that former Fresh Fruit Portal columnist and fruit fanatic Rolf Blancke last year published his book Tropical Fruits and Other Edible Plants of the World: An Illustrated Guide, so I'd like to give him a shout out here.

I first spoke with Rolf when I was about 1.5 years into this job and still really learning the ropes (anyone who works with fruit knows this is a lifelong lesson). Passionate fruit biodiversity advocates like him and Adam Leith Gollner brought an inspiration that I also try to instill through our reporting. Yes, production forecasts, market dynamics and growing techniques are all of vital importance to the sector, but it pays to look at the bigger picture and appreciate how the natural world is literally at the root of the fruit sector, thus all of our livelihoods, and it's important we protect it - the soil, water, adjacent natural reserves, everything.

And on the topic of the environment, this brings me to one of the big stories that captured the public's attention this year. There is currently an island of plastic the size of Mexico floating in the Pacific Ocean, and if consumption patterns continue as they are this problem is only going to get worse. The produce industry has the opportunity to set an example in this arena.

We see a lot of fresh produce marketing with angles around sustainability or environmentally-friendly growing practices, yet as I discussed in a recent podcast with the Canadian Produce Marketing Association (CPMA), nowadays there seems to be a greater use of plastic packaging in the produce industry than ever before.

This is likely a result of companies trying to compete with processed snacks that already come in packaging with ample marketing and branding space, and I understand that when you put significant investments into a product you want the packaging and marketing scheme that's going to garner the best returns.

It could be the case in the long term that consumers - at least in the developed world - will turn away from fruits and vegetables in plastic unless there is a greater industry-driven push towards the use of biodegradable or recyclable plastic packaging. Change is essential if the industry is to keep a clean, green image going into the future.

During the Amsterdam Produce Show, I spoke with Shaun Hersman of packaging company Modiform about this issue and the main dilemma seems to be around the challenges of recycling mixed plastic. There are just so many types of plastics out there, and you would be hard-pressed finding consumers who can tell the difference.

But if we only focused on the difficulties and not the opportunities, the produce industry wouldn't be where it is today.

I'd like to see a conversation begin about what could be explored to reduce the industry's "plastic waste footprint". For example, could there be some kind of industry-driven standardization of the types of plastics used in the produce aisle, so that all of it can be gathered up and re-used or recycled? Or could it be that consumers are incentivized to return clamshells or other plastic packaging to the store in exchange for small amounts of credit, similar to what's done with bottles in many European countries.

Wouldn't that also be a great way to drive repeat purchases, while simultaneously appealing to a growing consumer desire to feel a sense of contribution through their purchasing practices?

It's certainly something to think about as we near the end of 2017, and I'd like to thank all of you for your support and following our news. As previously promised, here are the top stories of the year:

Jalisco avocado delay in the U.S. has ‘nothing to do with Trump’

"We have been overconfident" in grapes, says northern Chilean ag rep

Cherry production could become a reality in Peru in four years

Maluma avocado hits the gas to catch up with Hass

Chile to ramp up production of GEM avocados

Colombia to be "relevant player" in blueberry industry, says nursery

Portugal: Blueberry exports expected to catch up with raspberries

Spotted wing Drosophila found for the first time in Chile

Canada: Record cherry exports expected from BC this season

Australia: From waste bananas to flour, cosmetics and resistant starch

Unintended effects of NAFTA rejig could be "quite dramatic", says Driscoll's CEO

What Whole Foods, Amazon, Lidl, Aldi and Wal-Mart mean for the produce industry

How much do apple names influence consumer purchases?

Australia on alert after stink bug find in Sydney

California: Thomas Fire means "long road back to rebuilding" for many avocado farms

Citrus at the checkout: Record season start for Wonderful Halos